India sources two-thirds of its oil supply from the middle-east and a conflict is likely to push up oil prices, zoom up deficits and potentially derail PM Modi's bid to fast-track the economy. 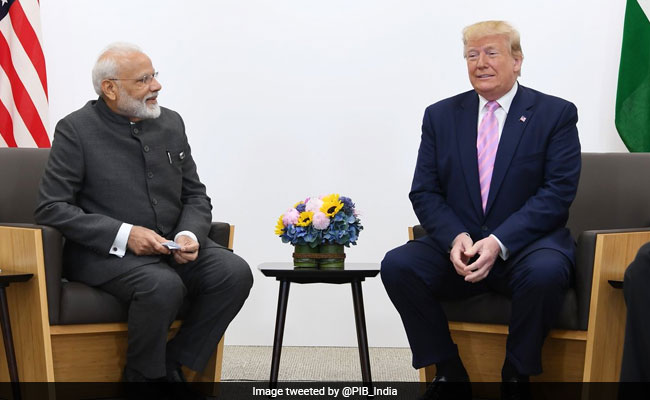 PM Modi and Donald Trump met ahead of the G20 summit in Japan's Osaka.

Prime Minister Narendra Modi and US President Donald Trump today focussed on the larger picture of the Gulf region and discussed the possibilities of bringing stability there -- a tweak on the expected line of talks on India's oil supplies. The two leaders held a 15-minute bilateral meet this morning on the sidelines of the G-20 summit in Osaka, where they discussed several contentious subjects.

"On Iran, the primary focus was on how we ensure stability there, as instability affects us in many ways, not just in the matter of energy needs, but also in terms of our large diaspora in Gulf," said foreign secretary Vijay Gokhale said, while briefing reporters on the bilateral.

Stability in the Gulf region is also crucial for India. As foreign secretary Vijay Gokhale pointed out, eight million Indians live in the Gulf.

The dispute between US and Iran took shape over Iran's threat to violate a nuclear deal it made with world powers in 2015. Matters escalated after the US said Iran targeted six oil tankers in the Gulf region - an accusation Iran has denied.

Last week Iran shot down a US drone, claiming it was in its air space, which Washington denied.

Though Indian suppliers have stopped purchase of oil from Iran to avoid sanctions after tension between US and the Gulf nation, the question of sourcing crude for India is yet to be sorted. Diplomatic sources said an official decision has to be taken and it was expected that India would discuss alternative sources of oil during the talks.

India sources two-thirds of its oil supply from the middle-east and a conflict is likely to push up oil prices, zoom up deficits and potentially derail PM Modi's bid to fast-track the economy.

Currently the emergency crude reserves are at 39.1 million barrels, which can run for just 9.5 days. Oil companies have stopped imports from Iran to avoid sanctions.