Nirav Modi and his uncle Mehul Choksi are the prime accused in the bank scam involving fake guarantees in the name of the state-run lender Punjab National Bank.

Fugitive jeweler Nirav Modi, prime accused In the Rs 13,000-crore PNB fraud case, has been denied bail after his arrest in central London's Holborn area today. He will be in custody till March, 29--the next date of hearing. On two different occasions, Nirav Modi was seen by the media in London after the UK put out an arrest warrant for him. Nirav Modi and his uncle Mehul Choksi are the prime accused  in the bank scam involving fake guarantees in the name of the state-run lender PNB to secure loans overseas. Both left India in January last year before the CBI started investigating the PNB scam.

Earlier this month, Nirav Modi was seen walking in London by a reporter of British newspaper The Telegraph. In a two-minute clip shared by the newspaper, the billionaire, was seen wearing a much-talked about expensive ostrich hide jacket, repeatedly said "no comments".

Here are the Highlights on Nirav Modi's arrest in London, in the PNB scam case

Mar 20, 2019 21:40 (IST)
Ministry of External Affairs statement on Nirav Modi
"We welcome the fact that Nirav Modi has been arrested by the United Kingdom authorities pursuant to the arrest warrant issued by the Westminster Magistrate Court.  Government of India continues to actively follow up this matter with the authorities concerned in the UK, with a view to have Nirav Modi extradited to India at the earliest."
Mar 20, 2019 21:19 (IST)
Mamata Banerjee credits Telegraph journalist for Nirav Modi's arrest
Credit must go to the London Telegraph journalist who exposed Nirav Modi The government had no clue where Nirav Modi was hiding. And a journalist had to expose where he was holed up
Like strikes at factories in the past, we are seeing new 'strikes' now. This Nirav Modi 'strike' is one of them. More such 'strikes' will happen during the polls
Mar 20, 2019 20:26 (IST)
Nirav Modi has been sent to the HMP Wandsworth Prison
Mar 20, 2019 19:46 (IST)
Nirav Modi can apply for bail again on March  29, the first day of his extradition hearing in the UK.
Mar 20, 2019 18:59 (IST)

Nirav Modi Arrested In UK: Nirav Modi Showed 20,000 Pounds A Month Payslip To UK Court
Nirav Modi Arrested: Fraud-accused jeweler Nirav Modi, arrested on Tuesday, told a UK court today that he was working in London for a salary of 20,000 pounds, or Rs 18 lakh, a month."
Mar 20, 2019 18:28 (IST)
"I believe you may have means of escape,"  judge tells Nirav Modi
I am  remanding you to custody, given the high value of amount involved in the allegations and the access you may have to means of escape. I have substantial grounds to believe that you may fail to  surrender
Mar 20, 2019 18:21 (IST)
Breaking: Court denies bail To Nirav Modi, to be in jail till March, 29.
Mar 20, 2019 17:56 (IST)
Next hearing in Nirav Modi's case in Westminster Court to be held on March 29, news agency ANI reports.
Mar 20, 2019 17:27 (IST)
Priyanka Gandhi Vadra on BJP claiming Nirav Modi's arrest is an achievement
This is not an achievement. Who let him flee in the first place?
Mar 20, 2019 17:08 (IST)
Nirav Modi's expensive paintings and fleet of luxury cars
Nirav Modi owns 173 paintings worth nearly Rs. 58 crores. The paintings and vehicles have been seized and will be sold to raise tax dues, the Enforcement Directorate said. 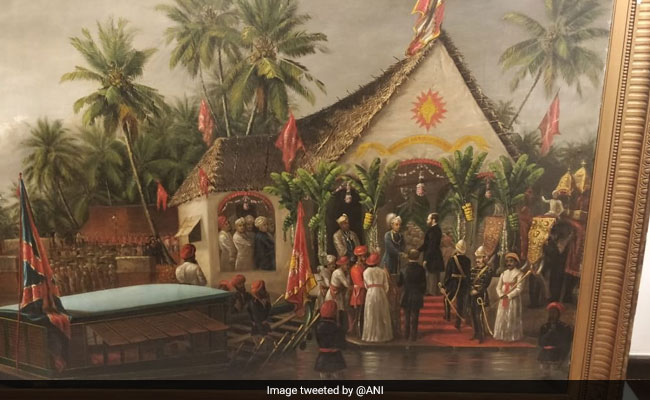 Nirav Modi Arrested, Opposition Takes On Centre, Says Just For Elections
Fugitive billionaire jeweller Nirav Modi's arrest in London has not impressed the opposition back home in India. In their first response to the move, opposition leaders said the arrest was mere symbolism ahead of Lok Sabha elections and that the government deserved no credit for the arrest."
Mar 20, 2019 16:15 (IST)
Enforcement Directorate statement on Nirav Modi 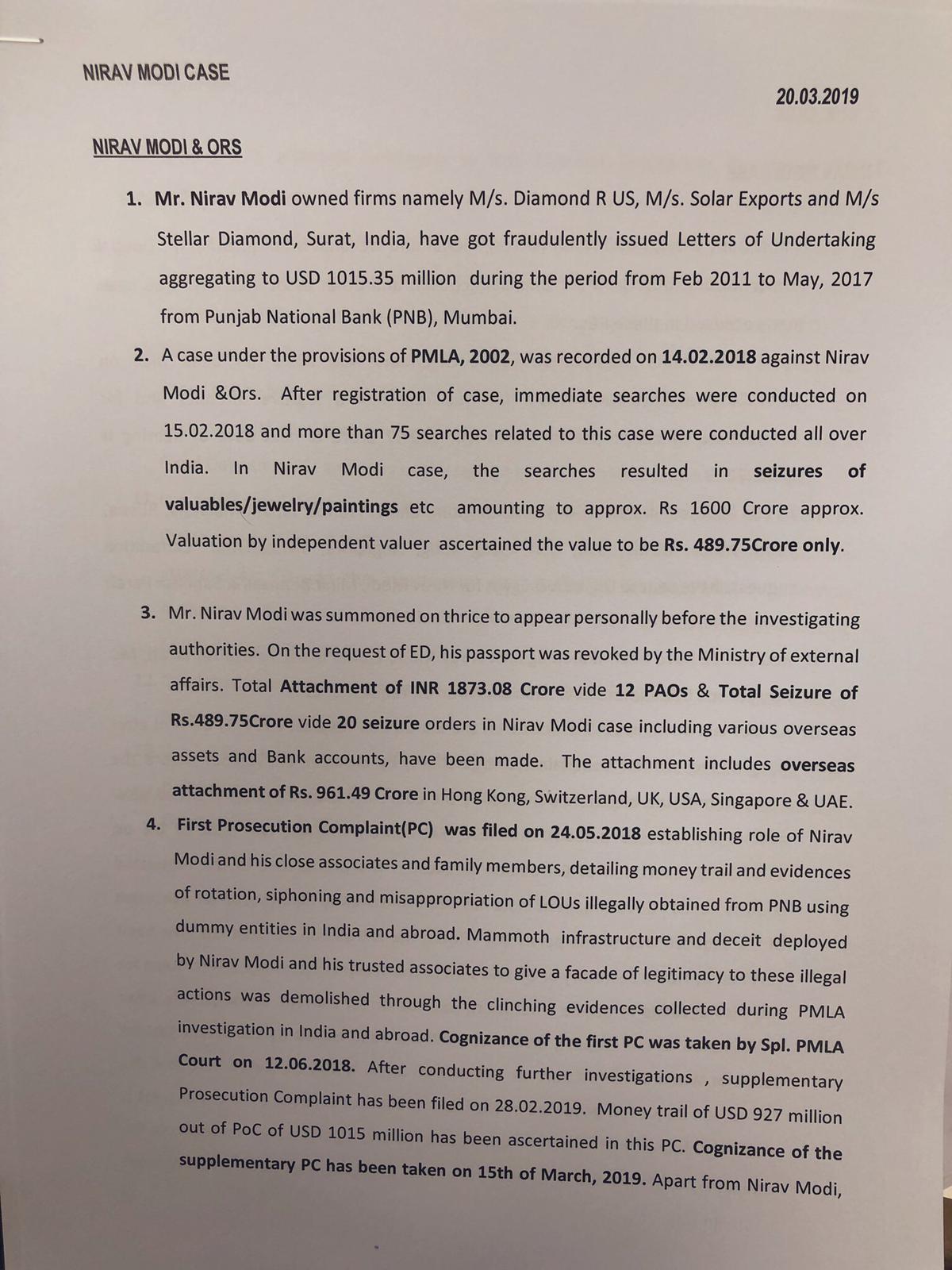 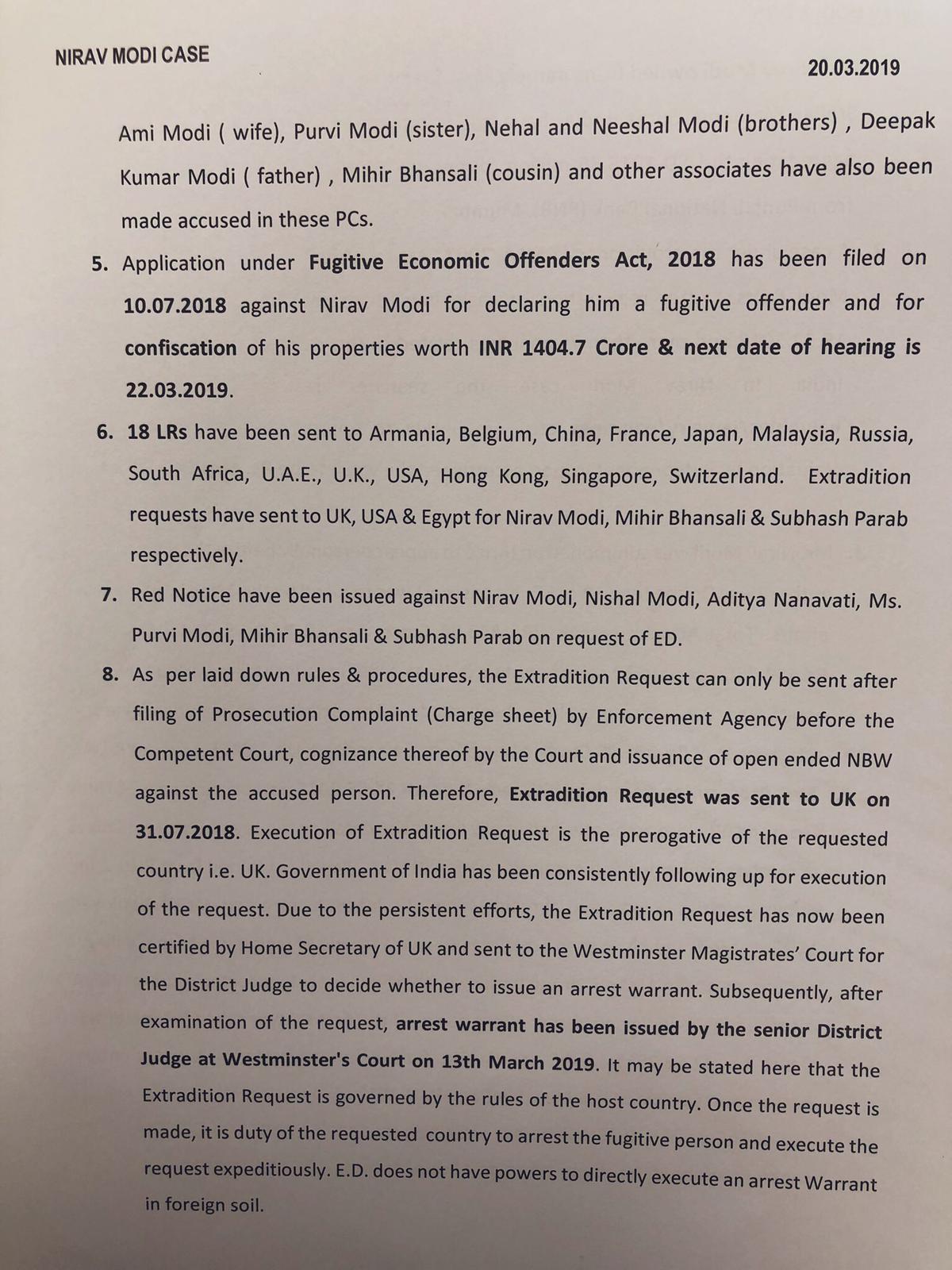 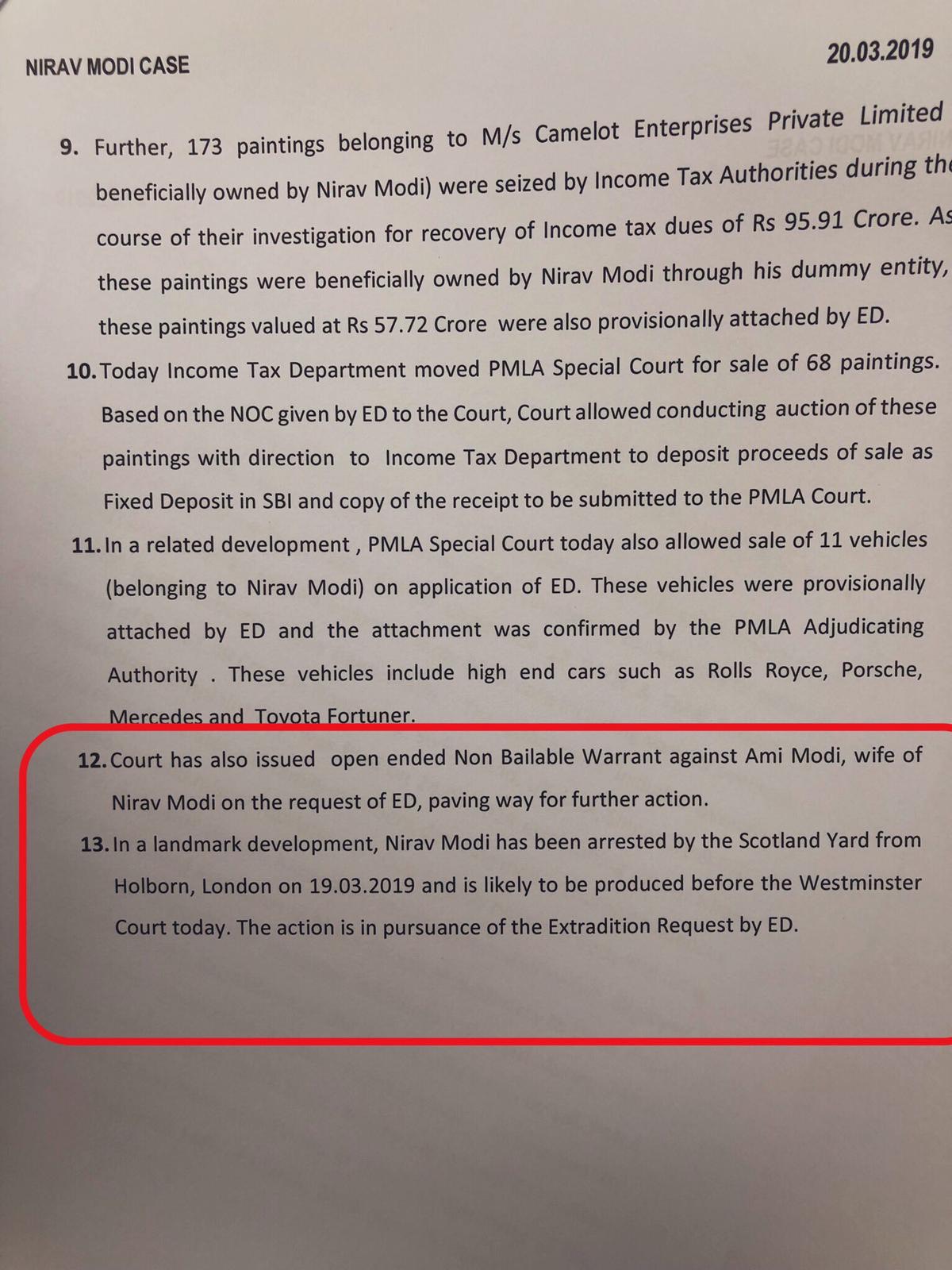 Mar 20, 2019 15:55 (IST)
Nirav Modi is now being produced in court
Mar 20, 2019 15:53 (IST)
CBI, ED team to fly to UK
A joint team of CBI and ED will fly to UK to assist the counsel who will be representing the agencies in Nirav Modi's case. The next date of the hearing (start of the extradition proceedings in judicial side) will be announced by the UK Magistrate court today and accordingly the joint team will leave for UK.
Mar 20, 2019 15:47 (IST)
The Enforcement Directorate gets permission from Prevention of Money Laundering Court in Mumbai to sell 173 paintings and 11 cars belonging to Nirav Modi. A non-bailable warrant has been against his wife Ami Modi, news agency ANI reports quoting sources. 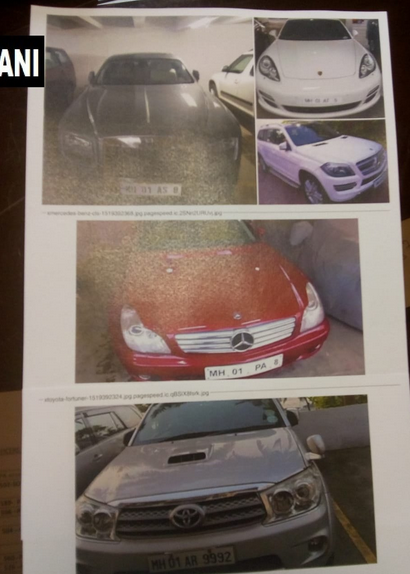 Mar 20, 2019 15:38 (IST)
Union minister Hardeep Singh Puri on the arrest
You can run, but cannot hide from the country's Chowkidar. As wheels of justice grind, after Vijay Mallya, fugitive Nirav Modi has been arrested in London. Clear sign that this is not the India which will allow economic offenders to loot the country & evade the long arm of law.
Mar 20, 2019 15:34 (IST)

PNB Fraud Case Involving Nirav Modi: Timeline And How The Events Unfolded
PNB fraud of Rs 11, 400 crore is being investigated by two central agencies - the Central Bureau of Investigation and the Enforcement Directorate."
Mar 20, 2019 15:29 (IST)
Omar Abdullah on Nirav Modi's arrest
It's amusing to see the BJP falling over itself to credit the PM with the Nirav Modi arrest while completely ignoring the fact that it was The Telegraph of London and it's correspondent who found Nirav Modi, not the PM and his agencies.
Mar 20, 2019 15:28 (IST)

UK Sought Papers To Arrest Nirav Modi. India Didn't Respond, Say Sources
When fugitive diamond merchant Nirav Modi was spotted on the streets of London last week looking somewhat different and wearing an extravagant ostrich-leather jacket, the government insisted there had been no delay on India's part in efforts to prosecute him and extradite him."
Mar 20, 2019 15:13 (IST)
On Monday, a court in UK had issued an arrest warrant against the 48-year-old billionaire following the Enforcement Directorate's request for his extradition.
Nirav ModiNirav Modi arrestNirav Modi extradition