Read inOther Languages
This Article is From Jun 09, 2019

The Siachen base camp is at an average altitude of 20,000 feet. It is also one of the coldest battlefields in the world. 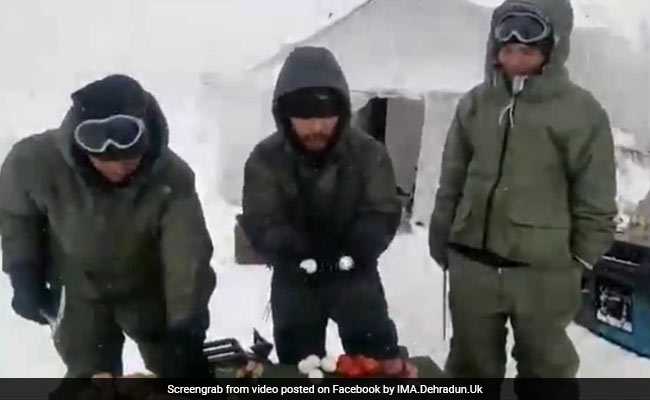 The video of the soldiers has been widely shared on Twitter.

In a cold, desolate place blasted by icy winds, three men try to defrost frozen eatables - juice boxes, eggs and vegetables - as hard as ice. They smash them with hammers multiple times while talking of the challenges of surviving in a hostile terrain. This is no scene from a survival drama film, but a video showing the tremendous difficulties that Indian Army soldiers posted at Siachen face every minute.

In the video, which has gone viral on social media, three soldiers show how they struggle to make the frozen food supplies usable at the high-altitude base. At the beginning of the video, a soldier rips open a box to reveal juice frozen like a brick inside. Then, another soldier hits the frozen juice with a hammer but it doesn't break.

After that, the soldiers try to break eggs, frozen as hard as stone, with a hammer. One soldier forcefully throws the eggs on a stone slab and yet nothing happens. "These are the kinds of eggs you get at a glacier," a solider jokes and his colleagues laugh. Similarly, they try to break onions, tomatoes, ginger and potatoes.

"The temperature plunges as low as minus 70 degrees. Life here is hell," one soldier says. Behind him is a view of their camp-a white expanse.

The video of the soldiers has been widely shared on Twitter, with people saluting the soldiers for their grit and endurance. "Life in Siachen can be tough beyond one's imagination. Making a simple dal or chawal is a challenging task when temp drops to -30 to -40 degrees," one Twitter user wrote.

"Life in Siachen glacier for soldiers: juice frozen to a brick and hammer needed to break eggs, but their smile is not lost in such dire circumstances," a user named Neeraj Rajput wrote.

The Siachen base camp is at an average altitude of 20,000 feet. It is also one of the coldest battlefields in the world. Soldiers have to battle frostbite and icy winds. Avalanches and landslides are common at the glacier and the temperatures drop to minus 60 degrees.