Karti Chidambaram was arrested on Wednesday morning from Chennai airport minutes after he returned from UK, where he had gone on a business trip following permission from the Madras High Court. 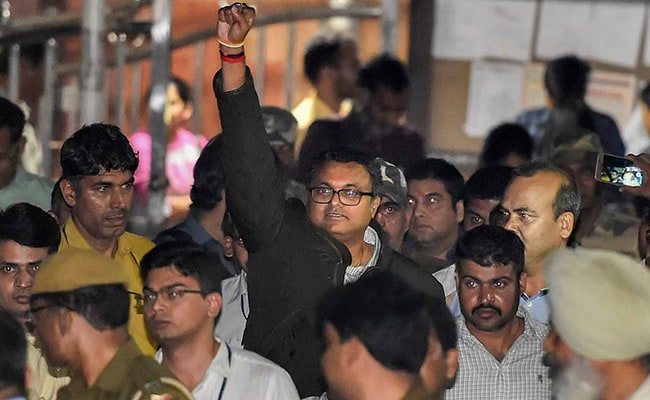 Karti Chidambaram was arrested on Monday in connection with a corruption case.

New Delhi: Former union minister P Chidambaram and his wife Nalini Chidambaram met their son Karti Chidambaram this evening minutes before a Delhi court gave his custody to the Central Bureau of Investigation for the next five days. Investigators say Karti Chidambaram got government clearance for foreign investments worth around Rs. 300 crore in television company INX Media in exchange for bribes in 2007. The agency had sought his custody for two weeks, saying he was not cooperating with the investigation.

Mr Chidambaram sat with his son during the hearing and spoke quietly together. Nalini Chidambaram, a senior advocate, was present too.

The court has allowed the 46-year-old businessman to carry his prescription medicines. He has also been allowed to wear his own clothes. When the agency officials insisted that he take off his gold chains, Karti Chidambaram refused, saying he wore them for religious reasons. The court allowed that, but drew the line at allowing him to receive food delivered from home.

As the lawyers from both sides argued the privileges, special judge Sunil l Rana became stern. "Don't fight on trivial matters. Do the job - investigation," he said.

Karti Chidambaram was arrested on Wednesday morning from Chennai airport minutes after he returned from UK, where he had gone on a business trip with permission from the Madras High Court.

He is accused of receiving kickbacks in 2007 for getting government clearance for Rs 350 crore foreign investment for television company INX media, using the influence of his father, who was then the Union finance minister. At the time, the company was owned by Peter and Indrani Mukerjea.

Promoted
Listen to the latest songs, only on JioSaavn.com
The couple, who have been in jail since 2015 on charges of murdering Ms Mukerjea's daughter Sheena Bora, have given a statement that has linked the former Union Finance Minister to the CBI case filed against Karti Chidambaram.

The former Union Minister and his son have denied the allegations, calling it a case of "political vendetta". They have pointed out that Mr Chidambaram, as Finance Minister in 2013, had first ordered a probe by the Serious Frauds Office into allegations against the INX Group.
Comments
P ChidambaramKarti Chidambaram