For Huge Mandate in Chhattisgarh, Congress Plans "Thank You" For Farmers

Congress' victory will sweep out the BJP government led by Raman Singh, which has been in power in Chhattisgarh for 15 years. 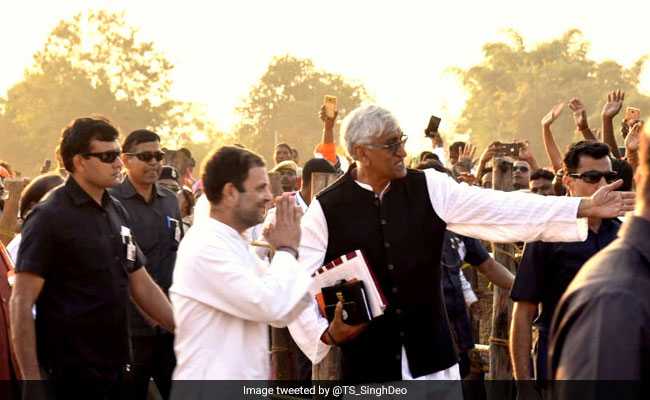 Congress said its first act in Chhattisgarh will be to sign-off a loan waiver for farmers.

The Congress today said the first act of its government in Chhattisgarh will be to sign-off a loan waiver for farmers - a "thank you" note for the huge mandate it is set to receive. The party is ahead on more than 60 of the state's 90 seats. Its victory will sweep out the BJP government led by Raman Singh, which has been in power in the state for 15 years.

"I had always thought we would get over 52 seats in Chhattisgarh. If we cross 60, I would not be surprised," said TS Singh Deo, the party's seniormost leader in the state. "The first decision the Congress will take in the first 10 days is sign the file on the loan waiver," he added.

The entry of Ajit Jogi and Mayawati, he said, had proved expensive for the BJP and not the Congress, he said. There were apprehensions that Ajit Jogi, a former Congressman and the state's first Chief Minister, would draw votes away from the Congress. The two parties had tied up after Mayawati gave a decisive no to any tie-up with the Congress after the seat sharing talks fell through.

"I have always been saying Mr Jogi will cause more damage to the BJP. I am glad to have been proven right," said Mr Singh Deo, who was the Leader of the Opposition in the state.

Most exit polls had predicted a neck and neck fight between the two parties in Chhattisgarh, where the Congress campaign had been low profile. Mr Singh Deo today said the scale of the party's victory showed a sound organization. "Had there been any clash or schism (within the Congress), the results would not have shown this kind of confidence," he said.

The results have come as a jolt for the BJP, which had been banking on the performance of Raman Singh's government. "The only shocker is Chhattisgarh where we had one of our most popular chief ministers in Raman Singh," said party leader Shaina NC.