In a video released by the army, the 16-year-old girl is seen accusing the locals of instigating the protests.

Srinagar: Schools reopened in Handwara today a week after arson and violence ripped through this small town in north Kashmir, 70 km north of Srinagar. But the 16-year-old girl whose allegations of being molested by a soldier impelled a blistering cycle of protests and police firing is not in class.

Last Tuesday, the police released a video in which she said that it was not an army soldier, but a shopkeeper and another young man who tried to harass her as she emerged after using a public toilet on her way home from school.

She was pressured into changing her version, her angry mother said, pointing out that the teenager's face was not masked in the footage to protect her identity.

Classmates today said that the school girl "suppressed reality, she should have spoken the truth".  Most did not want to be identified as they said they would not mingle with her if she returns. 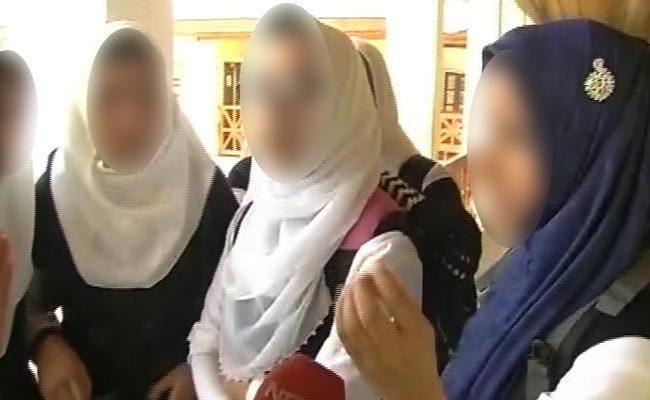 Classmates of the 16-year-old girl who was allegedly molested by a soldier.

The girl's accusation about the soldier drove massive protests in Handwara. After three people were killed, hundreds of stone-throwing locals clashed with security forces; an army bunker, 20 feet high, was set on fire in the heart of town.

Among those who were shot was a young cricketer. His death drove more demonstrations and another two civilians a including a 15-year-old student died. Handwara, which regularly defies diktats by separatists for strikes and votes in large numbers during elections, is a rare spot in the region where peace had held for nearly 15 years.

Appearing in a local court on Saturday, the teen said no soldier was involved in the alleged attack on her. She remains in protective custody with her father and aunt, said the police.

The headmaster of the teen's school said she must get back to her usual routine, and that she will not find herself alone.

"We will support her fully we would like her to continue her studies in this institution despite all the odds," said Principal Manzoor Ahmad.

For a frightened 16-year-old whose actions and words drove thousands to her defense and are now a matter of public scrutiny, any assemblage of a normal routine will fall utterly flat without the support of her friends, the girls she was till last week a part of, giggling as they passed notes in class or swerved to avoid teachers in corridors.