Floods In 3 Gujarat Districts As Narmada River Swells, Over 9,000 Shifted

The intensity of showers decreased during the day, but in the last three days, rain-related accidents claimed 12 lives in the state, said Commissioner of Relief Harshad Patel. 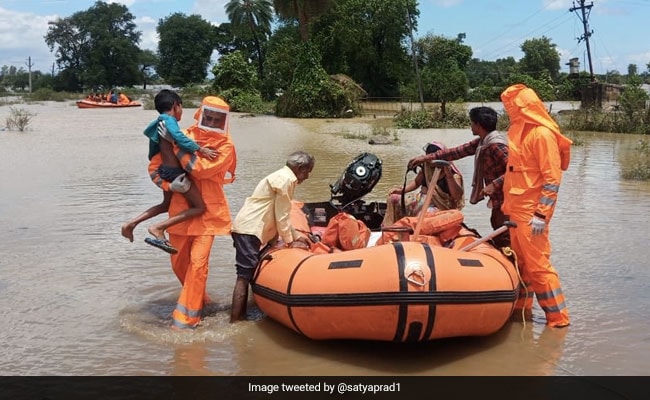 Over 2,000 people from along Narmada banks in Bharuch were shifted last month (File)

Over 9,000 people were shifted to safer places in Gujarat's Bharuch, Narmada and Vadodara districts with the Narmada river swelling due to heavy inflow from upstream dams, officials said on Tuesday.

The intensity of showers decreased during the day, but in the last three days, rain-related accidents claimed 12 lives in the state, said Commissioner of Relief Harshad Patel.

With continuous inflow of water from upstream dams, mainly the Indira Sagar in Madhya Pradesh, the water level of the Sardar Sarovar Dam (SSD) on the Narmada has now reached 133 meters against its top level of 138.68 meters, he said.

As per an official release, 10.70 lakh cusec (cubic foot per second) water is being discharged into the river by opening 23 of SSD's 30 radial gates.

As a result, the level of the Narmada has risen significantly in the last few days and water has now started entering low-lying villages on its banks in Narmada, Vadodara and Bharuch districts, Mr Patel told reporters in Gandhinagar.

"We have shifted 9,794 persons from 49 villages in these three districts so far," the relief commissioner said.

The state government said the water discharge in the Narmada would be curtailed after 10 pm on Tuesday as the outflow from Indira Sagar dam has been reduced from 11.40 lakh cusec to 7.40 lakh cusec.

After a heavy spell for three days, the rain took a break on Tuesday with only light to moderate showers recorded in some parts of Gujarat.