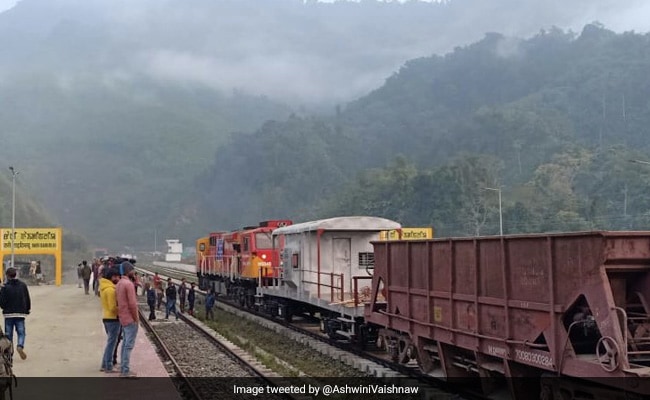 An Union minister shared a video of the goods train arriving at the station in Manipur.

With the first freight train reaching Manipur, Prime Minister Narendra Modi on Saturday said this will enhance the state's commerce and connectivity as goods from there will reach all parts of the country.

The freight train arrived at the Rani Gaidinliu station in the north-eastern state on January 27, days after a passenger train from Silchar in Assam reached the Bongaichungpao railway station in Manipur, where assembly polls will be held in two phases on February 27 and March 3.

"Transformation of the Northeast continues. Manipur's connectivity will be enhanced and commerce will be boosted. Wonderful products from the state can travel all over the nation," Prime Minister Narendra Modi said on Twitter tagging a post of Union Minister for Development of North Eastern Region G Kishan Reddy.

Transformation of the Northeast continues.

Manipur's connectivity will be enhanced and commerce will be boosted. Wonderful products from the state can travel all over the nation. https://t.co/TjS6oulZqj

The Union minister along with his tweet also shared a video of the freight train arriving at the station.

The @narendramodi govt is committed to enhancing infrastructure connectivity & economic prosperity in the NER. pic.twitter.com/HonyvJTbxf

Earlier this month, Railway Minister Ashwini Vaishnaw did an aerial survey of the Jiribam-Imphal new line project in Manipur.

The project, which includes the country's longest train tunnel, will connect Imphal with Guwahati.

He said that Rs 7,000 crore has been allocated this year for ongoing railway projects in the northeast.

On Saturday, sharing pictures of the freight train, Mr Vaishnaw tweeted, “As committed”.

He also tagged a January 5 tweet of his which said, ”Goods train will start rolling by end of this month up to Kaimai Road railway station.”

Taking to Twitter, the Manipur Chief Minister N Biren Singh on Friday said, "In yet another milestone, the first ever goods train reached Rani Gaidinliu Railway Station, Tamenglong yesterday. The improvement in railway connectivity, under the close supervision of Hon' PM Sh @narendramodi ji, will immensely improve the socio-economic condition of Manipur."