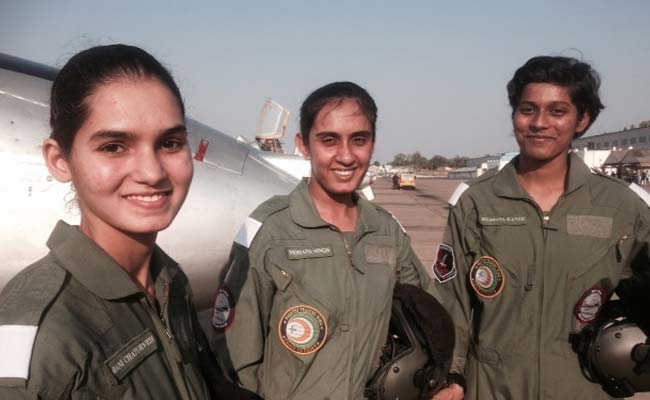 The first batch of women fighter pilots will be inducted in Air Force tomorrow.

New Delhi: On Saturday morning, flying cadets Bhawana Kath, Avani Chatuvedi and Mohana Singh will make history when they are commissioned as the first women fighter pilots in the Indian Air Force.

Each has cleared the first stage of training and has about 150 hours of flying. After getting their wings tomorrow as flying officers, they will train for six months on the Advanced Jet Fighter - the British-built Hawk - they will be assigned fighters and their squadrons.

Air Chief Arup Raha has already said that the woman fighters will get no preference and will be assigned as per requirements of the force.

The three women, all in their mid-twenties, have already encountered uncertainties and hazards of flying, when training and grit become the difference between a successful recovery and an accident, or even between life and death.

Avani Chaturvedi had to abort her second solo flight sortie minutes before take-off . "As I started rolling for take- off near the first marker, I heard the Canopy Warning Audio," she recounts.

The warning, she says, "confused" her initially, but her hours of training took over and she "aborted" the take-off bringing the aircraft to a halt safely on the runway.

For pilots, says Cadet Chaturvedi, it all about "split second" decisions. "Had I delayed aborting the take-off or got air borne with the open canopy, it would've been catastrophic," she adds.

Flying cadet Bhawana Kant said she was going in for her first ever solo spin and recovery manoeuvre when, flying at 20,000 feet, "doubt started creeping in," on what would happen if the aircraft didn't respond.

She nonetheless, she went into a spin. "It was more vicious," she says, adding, "the fighter pilot in me took over. The recovery action drilled "into us" took over. The aircraft "recovered from spin and so did my confidence."

On her first solo night sortie, flying cadet Mohana Singh encountered bad weather with thunder and lightning. She couldn't distinguish "between the stars in the sky and a small cluster of lights on the ground. Visual cues were going against cues from the instrument. The effect - it was difficult to maintain or ascertain the altitude of the aircraft.

Fighting her instincts to trust visual aids she switched to following only the instruments cues. "No unnecessary head movement, switch over to instruments," is what I was taught. Soon, she was in complete control, reoriented herself and "recovered the aircraft."