The farmers reached the Mumbai's iconic Azad Maidan this evening

Farmers from 21 districts of Maharashtra - thousands of whom had gathered on Saturday at Nashik and set off to march 180 km to Mumbai - began trickling into the state capital Sunday evening, ahead of a massive rally today to protest the centre's controversial new agriculture laws.

Visuals from the city border and toll gates showed the farmers - who number around 15,000, according to a statement by the Maharashtra unit of the All India Kisan Sabha - arriving in cars, jeeps, vans and trucks flying red flags.

Earlier, dramatic visuals showed a sea of farmers - many of whom were waving flags and carrying banners - snaking their way through the roads of the Kasara Ghat region between the two cities.

Less than two weeks ago Mr Pawar referred to the protesting farmers - particularly those who have braved winter chills to remain camped out around Delhi since November - and warned the centre of "consequences" if it failed to understand their sentiments.

Last month he issued a similar warning and said the centre should not test the farmers' patience.

Over a thousand tractors are expected to take part in the rally that will be held along the Ring Road (which encircles the city).

Late Sunday evening Delhi Police permitted the rally but imposed a number of conditions, including fixed entry and exit spots and allowing the farmers to protest only after Republic Day functions finished. 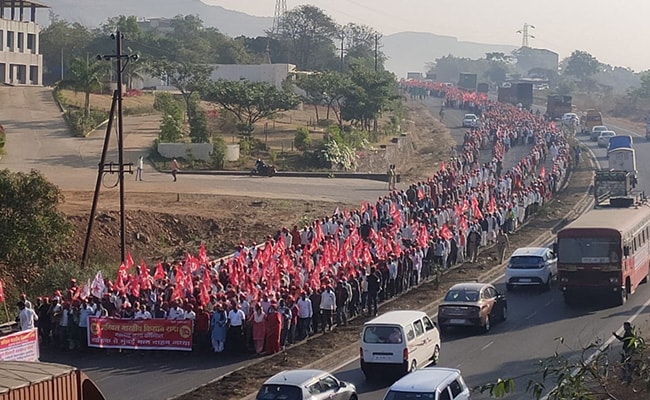 The centre, which has held 11 failed negotiations with the farmers, is against the rally; it told the Supreme Court the event would be an "embarrassment for the nation".

A request to the court to halt the rally was turned down, with the decision left to the police.

The court had earlier upheld the farmers' right to hold a peaceful protest, as long as it did not damage property or threaten lives.

Protesting farmers have turned down a proposal to suspend the laws for 18 months.

They insist - as they have since their protests began over 60 days ago - that all three laws  must be scrapped and that the centre provide legal guarantees for MSP (minimum support price).

The centre, which is equally insistent the laws will benefit farmers, has said it will offer only written guarantees for MSP and that the laws will remain, although it is open to amendments.

Last week the Supreme Court put implementation of the agriculture laws on hold, and set up a committee of experts to resolve the long-standing dispute.