Earlier today, a group of 15 opposition MPs from ten parties, who reached the Ghazipur border to meet the protesting farmers, were stopped by police, one of the MPs said. 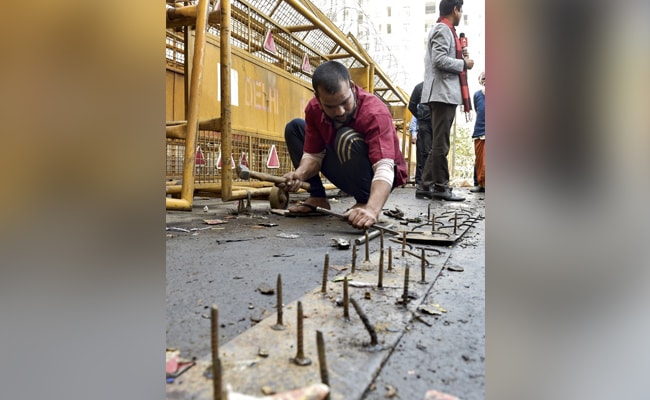 Farmers' Protest: The police said nails on the road at the Ghazipur border were being repositioned.

Nails fixed on the road at the farmers' protest site near the Delhi-Uttar Pradesh border are not being removed but only being repositioned to not cause problems to the public who may cross some spots, Delhi Police said today after videos of the nails being taken off the road emerged.

"Videos and photos are getting circulated in which it''s shown that nails are being taken off in Ghazipur. These are just being repositioned. Position of arrangement at the border remains the same," the police said.

At the Ghazipur border protest site as well as at the capital's border points with Haryana, the police have set up rows of barricades, barbed wire fences and spikes on the roads and dug up trenches to prevent the protesting farmers from forcing their way in after the Republic Day violence last week.

Earlier today, a group of 15 opposition MPs from ten parties, who reached the Ghazipur border to meet the protesting farmers, were stopped by police, one of the MPs said.

Several other borders of the national capital with Uttar Pradesh and Haryana have continued to remain closed for traffic movement due to ongoing farmers' agitation against the contentious agricultural laws.

Protesting farmers have announced a ''chakka jam'' by blocking all state and national highways for 3 hours on February 6.

Bharatiya Kisan Union leader Rakesh Tikait warned the government that it would find it difficult to stay in power if the new farm laws are not repealed. "We have so far talked about 'bill wapsi' (repealing the farm laws). The government should listen carefully. What will you do if the youth call for 'gaddi wapsi' (removal from power)?" he questioned on Wednesday.