The new 'weapon' comes after a Delhi policeman received injuries last week while trying to subdue a man - believed to be a farmer - brandishing a sword at Singhu on the Haryana border. 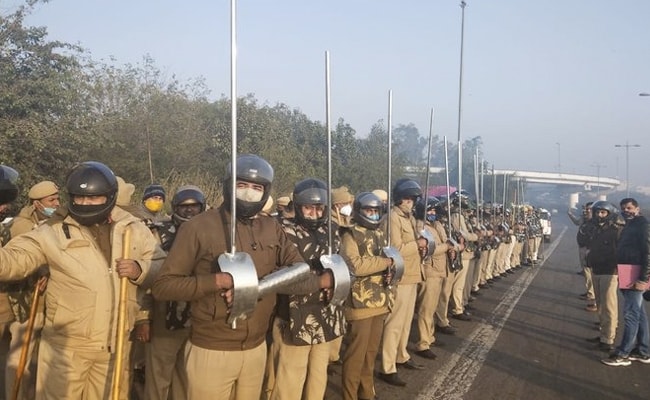 The police seem to have hit upon a solution to defend themselves against sword-wielding goons - such as the man who last week injured a cop at Singhu during a fight between farmers and a group of men attacking them.

In a photo shared by police sources a group of cops are standing by the side of a road in the national capital, equipped with appear to be metal gloves covering their forearm - wrist to elbow.

They are also holding a metal lathi with a large covering, or 'guard', around the grip that is big enough to allow both wrists to be shielded when swinging at an opponent - allowing them to be protected while dealing significantly more damage than a wooden lathi.

There is so far no official confirmation, so far, from Delhi Police on the details of this equipment.

The new 'weapon' comes after a Delhi policeman received injuries last week while trying to subdue a man - believed to be a farmer - brandishing a sword at Singhu on the Haryana border.

He was allegedly fighting back after another group of men barged into the farmers' protest site - where tens of thousands have been camped since late November to protest against the centre's agriculture laws - and vandalised farmers' tents and equipment.

The police had to fire tear gas shells and use batons to break up the clash, in which police officer Pradeep Paliwal was injured as he tried to defuse the situation.

Visuals showed the man holding a sword and surrounded by the police, who were later seen taking away the blood-stained weapon.

Swords were also seen on Tuesday, when the farmers' Republic Day tractor rally dissolved into chaos after protesters clashed with cops at several places, and stormed into the historic Red Fort.

Another Delhi policeman was injured in those clashes.

The police have filed 38 cases and arrested 84 people, according to news agency ANI, in connection with the Republic Day violence.

They have also served notices to around 20 farmer leaders and Punjabi actor Deep Sidhu, who has been accused by the farmers of inciting the clashes and raising a Sikh religious flag at the Red Fort.

On Sunday a team of scientists from a forensic lab in Gujarat examined both the ITO junction and the Red Fort area - scenes of two of the most violent clashes.

One man - believed to be a farmer from Uttar Pradesh - and hundreds of cops were injured in the violence.