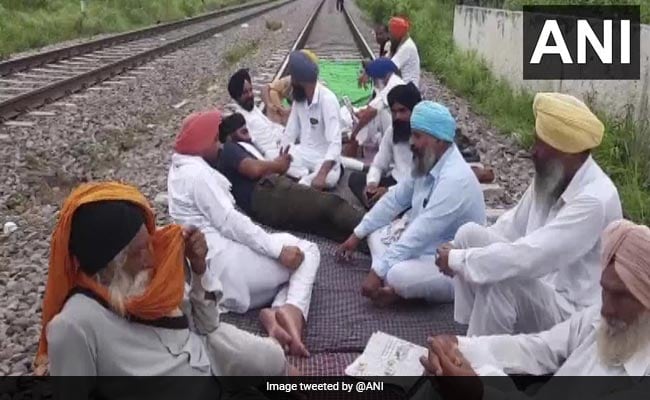 Farmers seeking a hike in sugarcane prices blocked rail tracks and a national highway in Punjab's Jalandhar for the second consecutive day on Saturday, affecting trains and vehicular traffic.

According to railway officials of Ferozepur division, as many as 69 trains have been cancelled, while 54 have been either diverted or short-terminated.

Rail passengers travelling for ''Raksha Bandhan'' festival on Sunday bore the maximum brunt of the blockade.

Scores of farmers had on Friday launched an agitation for an indefinite period to press the Punjab government to accept their demands related to pending dues of sugarcane and hike in cane prices.

On Saturday, they refused to lift the blockade till their demands were met.

Emergency vehicles have, however, been allowed to run, they added.

Protesters have blocked the Jalandhar-Phagwara stretch of the national highway near Dhanowali village of Jalandhar district.

The blockade affected vehicular movement to and from Jalandhar, Amritsar and Pathankot, though the administration diverted the traffic through some alternative routes.

Many rail passengers said they could not reach their destinations as their trains were cancelled.

"We got a message in the morning that our train scheduled to leave at 8 am has been cancelled. We booked tickets in another train but we are unsure whether it will run or not," a man sitting with his wife and a child at the Amritsar railway station said.

He added that he was to go to Bhopal. "Tomorrow (Sunday) is Rakhi festival, and we do not know how we will reach our destination," he rued.

Another passenger at the Jalandhar railway station said he was not aware of the farmers' agitation and came to know about the cancellation of trains bound for Dehradun after reaching the station.

Protesting farmers are demanding that the Punjab government raise the state assured price (SAP) of sugarcane and clear payment of arrears to the tune of Rs 200-250 crore.

They have already rejected the hike of Rs 15 per quintal announced by the Punjab government a few days back.

The state government had revised sugarcane rates to Rs 325 for the early variety, Rs 315 for mid variety and Rs 310 per quintal for the late maturing variety.