News Updates: The next round of talks will resume on January 4 at 2 pm on the two outstanding issues.

The sixth round of negotiations between farmer leaders and the government concluded today in the national capital. The government and farm unions reached some common ground on Wednesday to resolve protesting farmers' concerns over rise in power tariff and penalties for stubble burning, but the two sides remained deadlocked over the main contentious issues of the repeal of three farm laws and a legal guarantee for MSP.

The next round of talks will resume on January 4 at 2 pm on the two outstanding issues.

After the nearly five-hour meeting, Union Agriculture Minister Narendra Singh Tomar said a consensus has been reached between the two sides on two out of the four issues. "Talks concluded on a positive note. Consensus on 2 out of 4 issues was reached between both sides. We have told them we are open for talks on their issues and problems," Mr Tomar said.

Mr Tomar said the union leaders kept insisting on repeal of the three farm laws, but the government side tried to explain them the benefits of the Acts and sought to know specific problems faced by the farmers.

Here are the highlights on farmer protests in India:

There's still a deadlock over 3 farm laws being scrapped. We couldn't reach a consensus with them on MSP. On issue of stubble burning, govt agreed to exclude farmers from fine. On electricity issue, govt has taken back Power Bill 2020: Krantikari Kisan Union President Darshan Pal pic.twitter.com/lBqQgD53JD

Dec 30, 2020 20:23 (IST)
Considering the chilly weather in Delhi, I have requested the farmer leaders to send home the elderly, women and children: Narendra Singh Tomar

Considering the chilly weather in Delhi, I have requested the farmer leaders to send home the elderly, women and children. The next round of talks will be held on January 4: Union Agriculture Minister Narendra Singh Tomar pic.twitter.com/VzRDEaFqsr

Talks were positive today. Govt has been saying that we should end agitation & form a committee. But we didn't listen to them. We won't take back our movement. We won't form any committee. We'll discuss MSP in next meet: Balkaran Singh Brar, Punjab President,All India Kisan Sabha pic.twitter.com/kHtnvtCJyV

Dec 30, 2020 19:14 (IST)
Farmers don't trust PM Modi: Rahul Gandhi
Congress leader Rahul Gandhi on Wednesday alleged that farmers do not trust Prime Minister Narendra Modi due to his long history of "asatyagraha" and shared an online survey asking people why the PM was not repealing the farm laws.
"15 lakh in every bank account and 2 crore jobs every year'', ''Give me 50 days time, else...'', ''We will win war against corona in 21 days'', ''Neither has anyone intruded into our territory nor took over any post''. Farmers don't trust Modi ji due to his long history of ''asatyagraha''," he said in a tweet.
Dec 30, 2020 17:01 (IST)
Government-farmers meeting: Ministers join farm union leaders to share "langar" food
Three union ministers joined farm leaders on Wednesday to share ''langar'' food arranged by protesting farmers during their sixth round of talks to resolve the deadlock over new farm laws.  The ''langar'' (community kitchen) food arrived in a van at the meeting venue, Vigyan Bhawan, after around two hours of discussions had taken place and the two sides took a break for tea and snacks.
Sources present at the venue said that Agriculture Minister Narendra Singh Tomar, Food and Railway Minister Piyush Goyal and Minister of State for Commerce Som Parkash joined the farmer leaders to share their langar food during the break.
Farmer leaders said that the talks were continuing and they were going ''agenda wise''.
Dec 30, 2020 16:23 (IST)
Delhi: Union Ministers Piyush Goyal & Narendra Singh Tomar having food with farmers leaders during the lunch break at Vigyan Bhawan 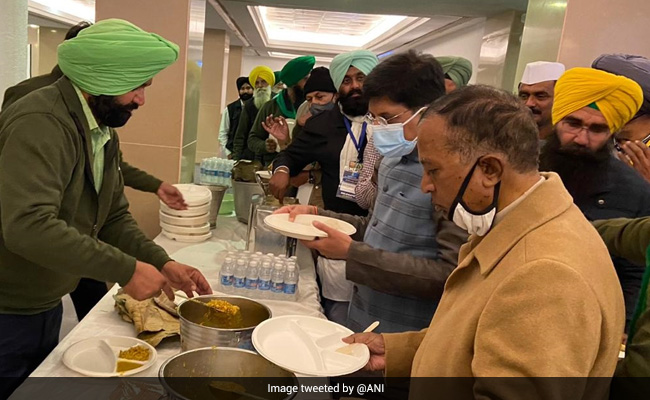 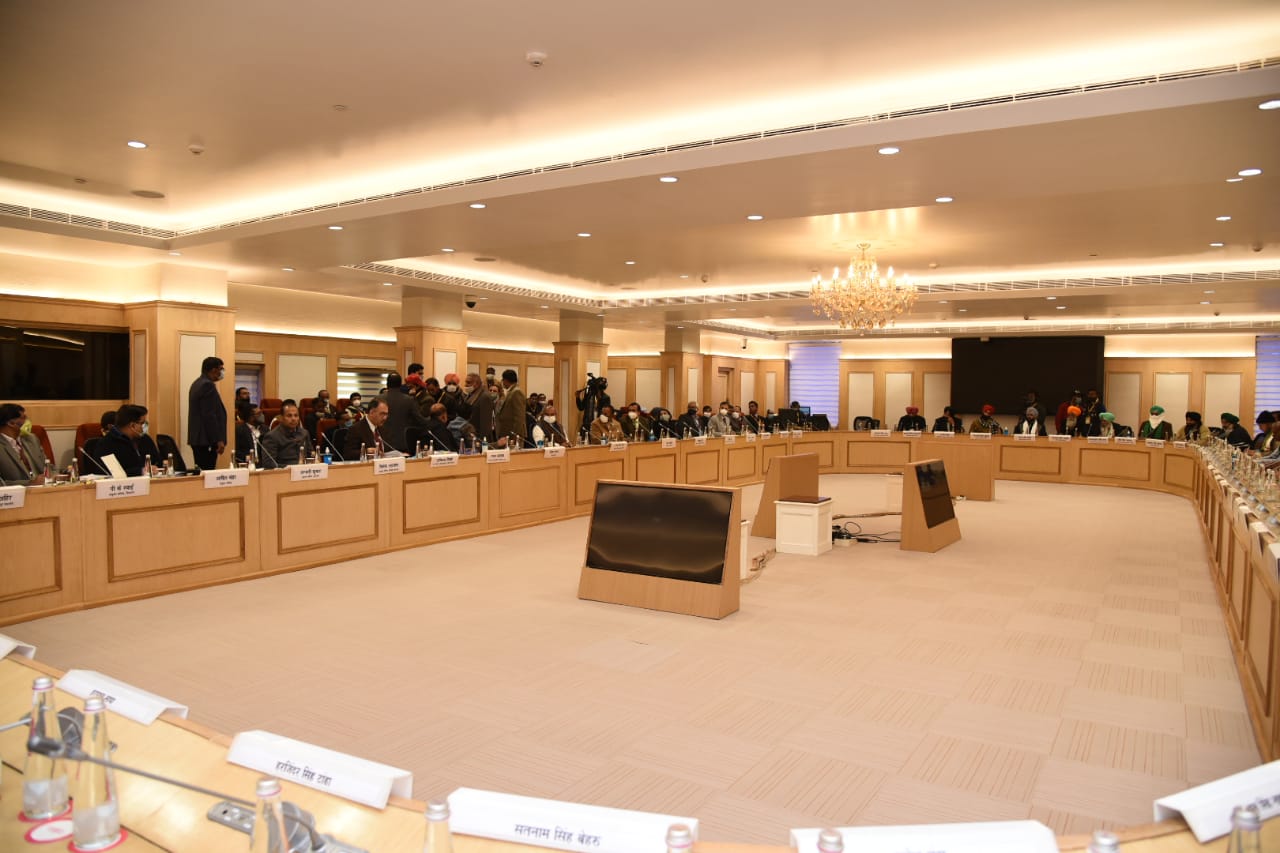 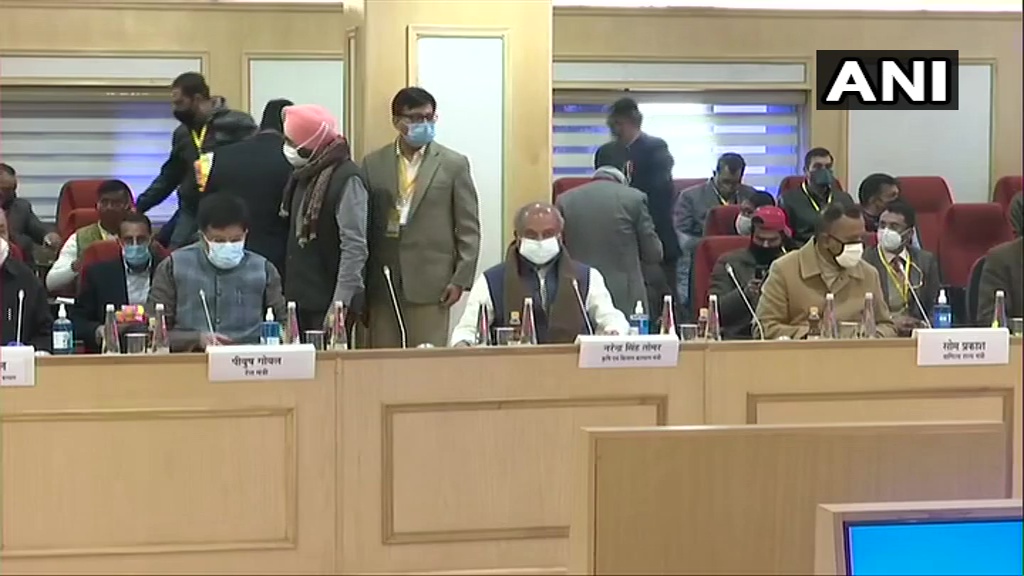 Dec 30, 2020 13:43 (IST)
Punjab Police Promises Action Against Those Who Destroyed Mobile Towers
The Punjab Police has said it will take action against "those involved in violence under the garb of democratic right to protest", referring to damage of more than 1,500 Reliance Jio towers allegedly by those protesting for repeal of three farm laws.
"We will take action against those who were involved in violence under the garb of their democratic right to protest. Services at telecom towers, which were disrupted due to violence, is being restored," senior Patiala police officer Vikram Jeet Duggal told news agency ANI.

The statement came a day after Punjab Chief Minister Amarinder Singh directed the police to act strictly against vandalism of mobile towers, which has disrupted telecom services in the state. Read

"First of all, I would like to say about the prime minister of any country that comment should not be made about India's internal affairs. India does not require any outside interference. We will sort out issues by ourselves. It is an internal matter of India. No country in the world has the right to comment on India's internal affairs," Rajnath Singh said in an exclusive interview with ANI. Read

Dec 30, 2020 11:55 (IST)
Were Farmers Consulted Before Farm Laws? "No Record," Says RTI Response
Despite the centre repeatedly stating that it held multiple consultations with 'stakeholders' before passing the three controversial farm laws, a response to a RTI query filed by NDTV says the government "does not hold any record in this matter".

The Narendra Modi government has been criticised - by the opposition and farmer groups protesting the new laws - for not holding enough consultations before the bills were passed.

However, the government insists that it held several rounds of discussions with farmers. Read

Dec 30, 2020 11:52 (IST)
Don't expect a solution even today: Farmer leader
Senior farmer leader Sukhwinder Singh Sabra has said that he is not expecting a conclusion even today. "Five rounds of talks between farmers and govt have taken place. We don't think we will reach a solution even today. The three farm laws should be repealed," he was quoted as saying news agency ANI.
Dec 30, 2020 10:34 (IST)
Hema Malini pitches for farm laws
Actor-politician Hema Malini on Tuesday pitched for the three new agri-marketing laws, saying the Narendra Modi government has now given farmers more options to sell their crops.

"Ever since the BJP-led government came to power, it is making every effort to increase the farmer''s income," Mathura''s BJP MP told reporters through a video link. Earlier, she also talked to officials here through video conferencing.

She appealed to farmers and their unions to give up their protest over the new farm laws and sit across the table with the government to remove their apprehensions.

She asked them to have faith in Prime Minister Narendra Modi, calling him their well-wisher.

Defence Minister Rajnath Singh on Wednesday strongly disapproved of remarks such as "Maoist" or "Khalistanis" in the context of protesting farmers and said "allegations should not be made by anyone" against them.

In an exclusive interview with ANI, the minister said that the farm laws have been made in the interest of farmers and the protesting farmers should see their implementation for two years.

Dec 30, 2020 08:39 (IST)
Will Only Discuss Repeal Of Laws, MSP Guarantee: Farmers Ahead of Talks
Farmers protesting the agriculture laws fired a warning shot late Tuesday night ahead of a sixth round of talks with the centre tomorrow, saying that they would only discuss certain issues, including modalities of repealing all three laws and providing legal guarantees for MSP.
The nationwide protest by tens of thousands of irate farmers has rumbled on for over a month now, with their core demand - the scrapping of the laws and legal support for MSP - unchanged.

The centre has been equally obstinate - the laws will not be rolled back (but certain sections can be amended) and it will offer only a written (not legally binding) guarantee for MSP.
Dec 30, 2020 08:38 (IST)
Ashok Gehlot Demands Waiver Of Farmers' Outstanding Loans In Letter To PM
Rajasthan Chief Minister Ashok Gehlot wrote to Prime Minister Narendra Modi on Tuesday demanding a waiver of the outstanding loans taken by farmers from nationalised and Bhoomi Vikas banks.

According to a Right To Information (RTI) reply, the Modi government, in its first tenure, had waived loans amounting to ₹ 7.95 lakh crore of industrialists, but had done nothing for the farmers, Ashok Gehlot said in a statement.