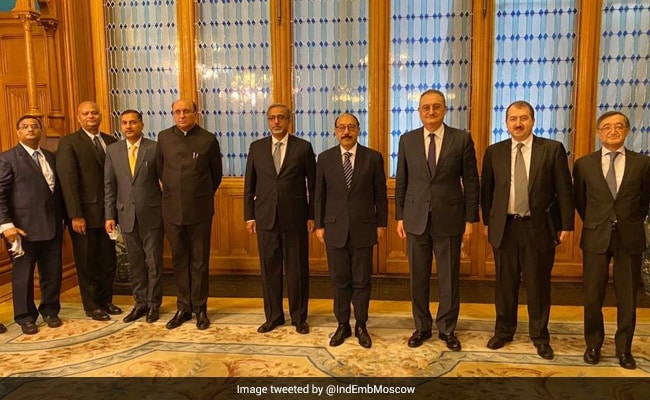 Shringla, who arrived in Russia on his first foreign visit this year, and Morgulov also reviewed preparatory work for the forthcoming high-level meetings, including Annual Bilateral Summit.

During the meeting, Foreign Secretary Shringla and Deputy Foreign Minister Morgulov had "excellent discussion on bilateral issues, cooperation in multilateral organisations as well as regional and global issues of mutual interest," the Indian Embassy in Moscow said in a tweet.

"Strong ties between #India & #Russia were further strengthened during the Foreign Office Consultations where all aspects of the multi-faceted relationship were discussed, along with other areas of mutual interest," the Indian Embassy tweeted.

His two-day official visit is likely to add momentum to the India-Russia special and privileged strategic partnership and exchange views on topical issues of regional and international importance.

In a video message posted on Twitter, Shringla earlier said: "I am very happy to be here in this beautiful city of Moscow. This is my first visit I've made outside India in the New Year. I am travelling in these COVID times gives an indication of the importance we attach to our relations with Russia".

"I am sure it will be a very-very fruitful and productive discussion," the foreign secretary said on his two-day official visit.

He said he would also meet academics, media personnel and experience the Russian culture.

"On the whole I think, we are on our way to see how we can add momentum to an already vibrant relationship, a very strong India-Russia special and privileged strategic partnership. Thank you. Spasibo vam (Thank you in Russian)," Shringla said.

In New Delhi on Monday, the Ministry of External Affairs (MEA) said this year's first visit abroad by the foreign secretary to Moscow, at the invitation of Russia's Deputy Foreign Minister Morgulov, signifies the importance India attaches to its close and friendly relations with Russia.

"The foreign secretary will hold the next round of India-Russia foreign office consultations with Deputy Foreign Minister Morgulov, during which the two sides will review the entire gamut of bilateral relations, including the forthcoming high-level exchanges," it said.

The MEA said both sides will also exchange views on topical issues of regional and international importance.

"Despite the COVID-19 pandemic situation, India and Russia have sustained the momentum of the Special and Privileged Strategic Partnership between the two countries," the MEA added.