On Camera, UP Cops Torture Man, Call It "Use Of Minimal Force"

In a detailed probe report submitted to the Etawah police chief by a senior police official, it was admitted that one of the constables used excessive force on the man. 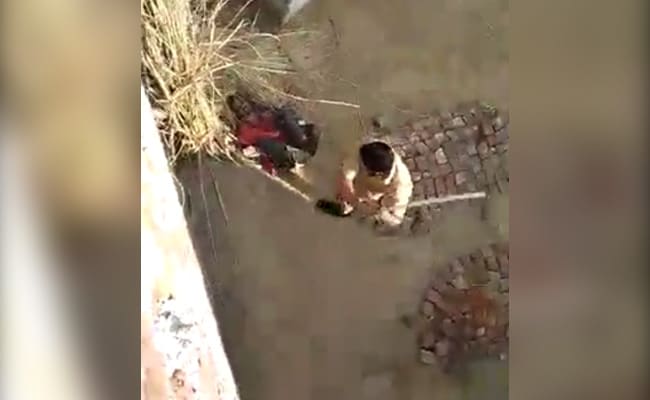 The video was filmed from a terrace in a village in Etawah where the assault took place.

A shocking and an extremely disturbing video from Uttar Pradesh's Etawah district shows two police constables hitting and torturing a man in a village in the district as he lies on the ground, begging for mercy and forgiveness.

The two-minute video was filmed from a terrace in a village in Etawah where the assault took place. The video was reportedly filmed on Friday and reports say, the man who was being assaulted by the constables is mentally challenged.

The video was shared on social media by many, including by the Samajwadi Party.

The video starts with a constable hitting the face of the man with his shoe. The man is seen lying on the ground. The same policeman then places his shoe on the man's chest and starts hitting him brutally with a cane. The man cries out in pain but the beating does not stop.

The constable continues hitting him with his cane. The helpless man begs for forgiveness and repeatedly calls out to "pradhan-ji" or the village head. Towards the end of the video, another constable can be seen joining the assault.

In an initial statement, the Etawah Police said the man being assaulted is Sunil Yadav and that he is a drug addict and prone to assaulting villagers in the area. The police claimed they had gone to apprehend him after a villager's complaint of assault and arson but when they reached the village, this man allegedly assaulted them with a knife.

The cops then had to use "minimal force" to take him into custody, the statement read.

Later, in a detailed probe report submitted to the Etawah police chief by a senior police official, it was admitted that one of the constables used excessive force on the man.

This report also says the man was treated for psychiatric issues at a hospital in western Uttar Pradesh's  Agra two years ago.

The police said constable seen in the video carrying out most of the assault has been suspended.