Noting that the CPI-M and the Left's representation in Parliament have come down to the lowest (five MPs) since the party's formation, Sitaram Yechury said the party leadership needed to do "serious introspection" regarding its decline since 2009. 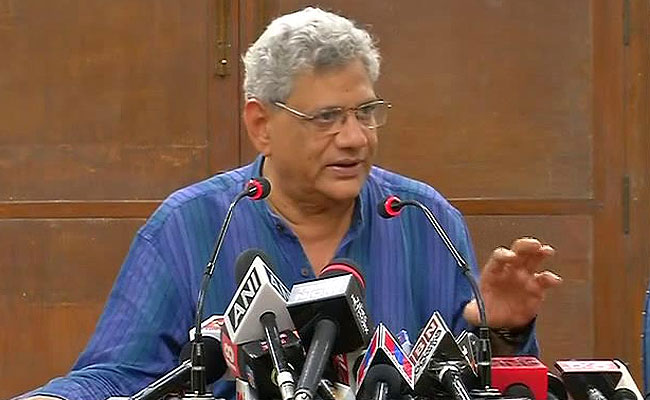 Calling the 2019 Lok Sabha election results a "severe setback" for the Left, CPI-M General Secretary Sitaram Yechury said on Tuesday the party would take up independent initiatives to strengthen itself and urged secular democratic forces to join hands to protect the constitutional republic of India.

"The Lok Sabha results have been a serious setback for the CPI-M and the Left not just in Bengal but also in traditional strongholds of Tripura and Kerala. It also shows most opposition parties, expect a few, have not fared any better," said Mr Yechury.

Pointing to consolidation of right wing forces across the country, he said this shift (towards the right wing) was a recent global phenomenon.

Noting that the CPI-M and the Left's representation in Parliament have come down to the lowest (five MPs) since the party's formation, Mr Yechury said the party leadership needed to do "serious introspection" regarding its decline since 2009.

Referring to the BJP's thumping victory in the Lok Sabha elections, he said the BJP was successful in fuelling an intense communal polarisation, creating a communal nationalistic jingoism and projecting a larger than life image of Prime Minister Narendra Modi to divert the voters' attention from the "humanitarian issues".

"It's clear from the results that there is a consolidated communal polarisation in the country. That's why the BJP does not have a single Muslim MP in this election. It's an ominous sign for India's secular democratic set up," Mr Yechury said.

Stating that the communal polarisation was accompanied by a communal nationalistic jingoism after the Pulwama terror attack and the Balakot airstrike, he said they helped the BJP change the narrative away from issues, like farmers' suicide, struggle of the working class, impacts of demonetisation and GST.