Election Results 2019: The Congress Working Committee, the top leadership body of the grand old party, will meet tomorrow at 11 am. 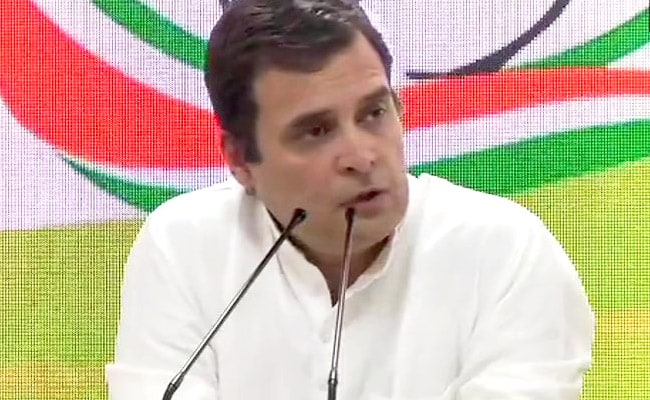 Rahul Gandhi was defeated in Amethi by over 55,000 votes.(File photo)

In the wake of the Congress' poor performance in the Lok Sabha polls in Uttar Pradesh, state party president Raj Babbar has sent his resignation to Rahul Gandhi. Mr Babbar has taken responsibility for the party's drubbing in the state.

The Congress faced its second straight landslide defeat in the national election in the national polls yesterday, in which Prime Minister Narendra Modi's BJP won 300 of the 542 Lok Sabha seats. Congress President Rahul Gandhi failed to retain even Amethi, a seat that has voted for the Gandhis for decades.

The Congress Working Committee, the top leadership body of the grand old party, will meet tomorrow at 11 am. Top leaders including former prime minister Dr Manmohan Singh are expected to be attend the meet.

Here are the LIVE updates of Election Results 2019:

Former Karnataka CM and Congress leader Siddaramaiah: There is no threat to the government (state). #Karnatakapic.twitter.com/YXnPKuwSx0

Congratulations to all the winners of the Congress Party. You make us proud, keep the good fight going! pic.twitter.com/wMRJtTKRHY

Karnataka Congress Campaign Committee President, HK Patil writes to party president Rahul Gandhi, states, 'It is time for all of us to introspect. I feel it my moral duty to own up the responsibility, hence, I submit my resignation from the post.' (file pic) pic.twitter.com/9Yw4yVdStM

Niranjan Patnaik, President, Odisha Pradesh Congress Committee: I too had contested the election, party had given me a responsibility, I take the moral responsibility for this debacle and relinquish this job. I've communicated it to my AICC President. pic.twitter.com/r60PuNeSeW

May 24, 2019 13:23 (IST)
Rahul Gandhi is expected to resign tomorrow at a meeting of the Congress Working Committee (CWC), the party's top decision-making body.
Rahul Gandhi, besides leading a dud election campaign that failed to win over voters, also lost his traditional constituency Amethi, the Gandhi family stronghold in Uttar Pradesh.
May 24, 2019 13:23 (IST)
A day after the Congress's second straight defeat in the national election, resignations were flying. Three state chiefs including Raj Babbar, the Congress's Uttar Pradesh president, sent their resignations to their boss Rahul Gandhi on Friday over the party's abysmal performance.