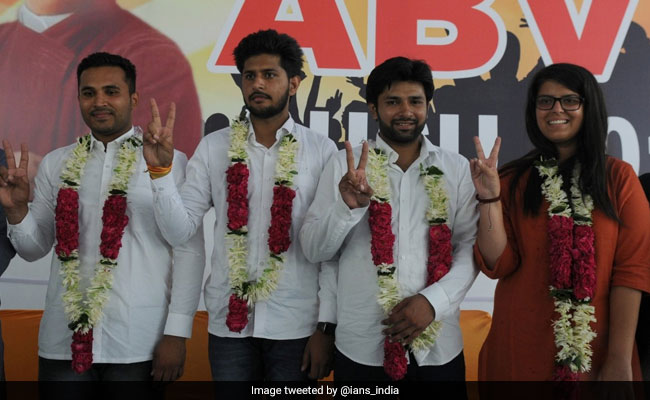 Like the BJP, ABVP also replaced manifesto with the 'vision document'.

In the last Lok Sabha elections, the BJP had adopted a new strategy of appointing 'Panna Pramukhs' where each 'prabhari' (in-charge) was given responsibility for a 'panna' (page). The prabhari's job was to make sure that he targets the names on the page. Usually, a page has about 30 to 35 names.

Even though the ABVP hasn't officially subscribed to this expression, their method of functioning was similar to it in the DUSU elections held on Thursday.

According to ABVP state secretary Siddharth Yadav, the step was aimed at helping his organization understand better the issues and challenges of every student in DU.

He told IANS that the class volunteers were asked to make lists of ABVP supporters, those who supported other groups and those who were neutral.

Priority was to improve voter turnout and later the target was to bring votes for ABVP, he said.

"We don't want to be a student wing where the leaders do not know issues of students," Mr Yadav said.

Despite this, Yadav believes the outgoing DUSU, dominated by ABVP, had managed to work hard and earned ABVP a good name among students.

"Our president was disqualified, but then the rest of the DUSU and especially Shakti Singh, who was promoted from vice president to president, managed to reach students and stand up for their issues. This has earned good name for us," the ABVP leader said.

Apart from this, ABVP had also made sure that it replaced election manifesto with the 'vision document', which was prepared after consultation with students of DU. In the vision document issued by ABVP this year, it showcased a three-year plan called 'Vision 2022', more like the BJP at the national level.

The issues that the student body focused on included building better infrastructure and improving ranking of DU by 2022, the year when DU celebrates its 100 years.

(This story has not been edited by NDTV staff and is auto-generated from a syndicated feed.)
Comments
ABVPDUSU