Mahalaya 2020: Prime Minister Narendra Modi greeted people on Mahalaya. Lakhs offered prayers to their ancestors on the banks of the Ganga today. 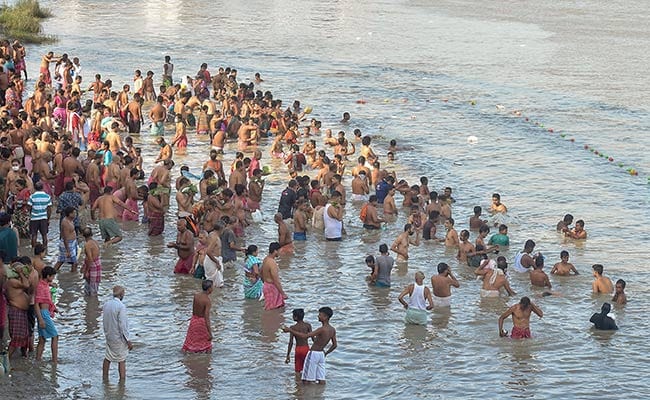 Mahalaya 2020: Prime Minister Narendra Modi today greeted people on Mahalaya, which marks the end of the 16-day Pitr Paksha. "We pray to Maa Durga to bless with strength to overcome the global pandemic. May the divine blessings of Maa Durga ensure good health and happiness in everyone's life...," the Prime Minister tweeted. This year PM Modi's birthday coincided with Mahalaya.

This Mahalaya, we pray to Maa Durga to bless with strength to overcome the global pandemic. May the divine blessings of Maa Durga ensure good health and happiness in everyone's life. May our planet prosper!

Lakhs of people did tarpan on Mahalaya in West Bengal on Thursday. Unlike other years, this year, Durga Puja will not start after Mahalaya. The Puja will begin 35 days later as the month of Ashwin, in the Hindu calendar, is inauspicious due to two new moons.

On Mahalaya, Hindus do tarpan, a ritual, offering prayers to parents who have died and ancestors. People usually visit the banks of the Ganga or any water body nearby and offer prayers. This year there were fewer people on the banks of the Ganga in West Bengal due to the coronavirus pandemic. Authorities told news agency Press Trust of India, that the river traffic police kept a strict vigil along the ghats to prevent any accident. Adequate measures were in place at the 18 ghats in Kolkata where volunteers of civic police kept a strict vigil so that social distance was maintained. Durga Puja 2020 Image: Kumartuli, where idols are made in Kolkata, wore a deserted look

On Mahalaya, usually Bengali households wake up to the rendition of Mahishasur Mardini, a collection of devotional songs and shlokas, welcoming Goddess Durga. Since the early 1930s, Mahisasur Mardini, a 90-minute programme, has been aired by the All India Radio every year, marking the beginning of the festive season. A recorded version of the audio montage was introduced 1966 onward.

The pandemic has dampened the festive spirit this year. On Mahalaya, the sculptors in Kumartuli, the hub in Kolkata, where the idols are traditionally made, wore a deserted look. Idol makers say they have received orders for fewer and smaller idols this year due to the COVID-19. "Raw materials have become expensive. We are facing difficulty as our business has been affected," an idol maker told news agency ANI.

On Mahalaya, sculptors usually draw the eyes of Durga, a ritual known as Chokhhu Daan. But this year it did not happen as Durga Puja starts over a month later.