The Madhya Pradesh tourism corporation started the drive-in centre at Ashoka Hotel in Bhopal where vaccinations will take place between 5pm and 8pm. 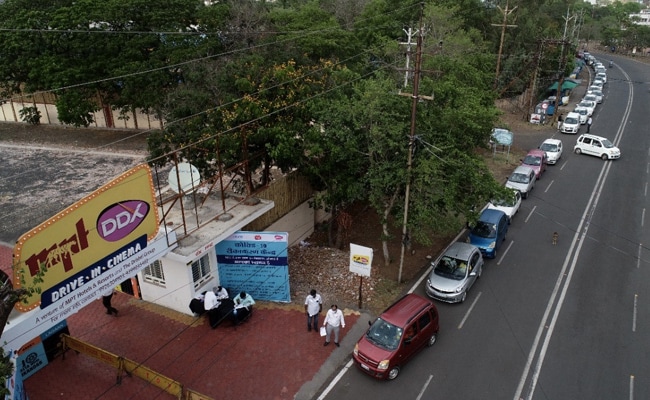 Many people said they felt safer while getting their Covid vaccine dose inside their car.

What was once a drive-in movie theatre in Bhopal, Madhya Pradesh, has now been turned into a COVID-19 drive-in vaccination centre where people can get their shot while sitting inside the safety of their cars.

The Madhya Pradesh tourism corporation started the drive-in centre at Ashoka Hotel in the city where immunisation started from May 1 when the centre launched the phase 3 vaccination drive for those above the age of 18 across India.

Due to adequate social distancing and no possibility of crowding, many people said they felt safer while getting their Covid vaccine dose here as compared to going to the hospital.

Ashoka Hotel manager KK Patel said there has been good response from the people. "They are getting the shot in open-air, while sitting inside their car. They are being asked to wait for around half an hour in the vehicle after taking the dose (to monitor their heath)," he told news agency ANI, adding that the drive-in vaccination is safe for people. Covid immunisation started from May 1 at the centre.

Mr Patel said vaccinations are done between 5PM and 8PM at the centre, for which registrations have to be made online through the Cowin portal or Aarogya Setu app.

The vaccination centre came up as cinemas and other entertainment complexes are shut in the state due to restrictions to tackle the Covid outbreak.

The official Twitter handle of the department of public relations in Madhya Pradesh posted: "Drive in vaccination has started in Madhya Pradesh's first 'Drive in Cinema' Bhopal... It is being operated in the premises of Hotel Lake View located in Shyamala Hills of the State Tourism Corporation."

"For safe vaccination, a pick and drop facility has also been introduced for the people. Interested persons can contact the Transport Branch of the Tourism Corporation at number 90397 61097." it added in another tweet.

Madhya Pradesh's COVID-19 tally today passed the six lakh mark after 12,062 people were detected with the infection, an official said. The caseload in the state now stands at 6,00,430, including 5,905 deaths, 93 of which took place during the day. At least 13,408 people were discharged from hospitals in the last 24 hours, taking the recovery count in the state to 5,08,775, leaving it with 85,750 active cases.