When fired, the plastic bullet sounds like normal firing so the psychological effect is the same.

There is a new alternative to the pellet bullet, the infamous "non-lethal weapon" being used to disperse stone throwers in Kashmir. The Defence Research and Development Organisation (DRDO) has developed a less lethal plastic bullet.

The use of pellet bullets as a crowd control measure had injured thousands and hundreds were blinded in the aftermath of Hizbul Mujahideen terrorist Burhan Wani's killing in 2016. Around 100 people had died in the violent unrest that followed.

After there was huge uproar after people were blinded due to the use of pellet guns, the Ministry of Home Affairs sought a quick and effective solution and the DRDO lab came up with this indigeneous development.

The plastic bullet can be fired from the AK-47 rifles and has been deployed by the Jammu and Kashmir Police, the DRDO said. This is less damaging than imported rubber bullets and was showcased on the sidelines of the ongoing Indian Science Congress in Jalandhar.

"A solution was needed for the notorious pellet gun," said Manjit Singh, Director, Terminal Ballistics Research Laboratory, one of the major laboratories of the DRDO, in Chandigarh.

Mr Singh said the plastic bullet is an effective way to control crowds and one lakh bullets have already been supplied to the Jammu and Kashmir Police. 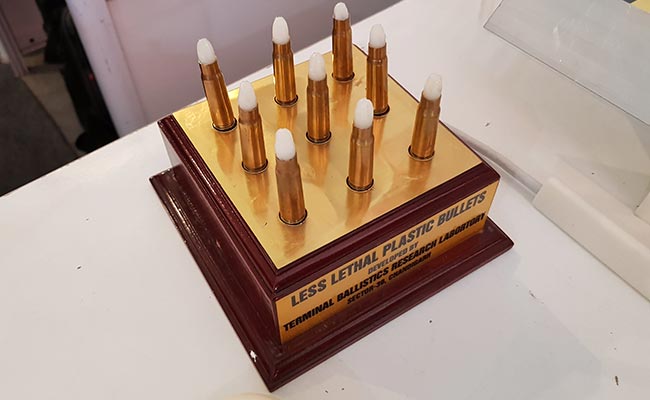 The plastic bullet doesn't use lead so there is no fear of poisoning.

Dr Satheesh Reddy, Chairman, Defence Research and Development Organisation, told NDTV, "Plastic bullet causes superficial injury when fired from a distance of 50 metre. It is made of nylon and is 500 times less injurious. The bullet head is fairly blunt and weighs much less and hence it can't penetrate the body to injure organs."

The plastic bullet doesn't use lead so there is no fear of poisoning. When fired, it sounds like normal firing so the psychological effect is the same.

Dr Reddy said that plastic bullet can be fired from standard weapons, only the magazine is different, which gives the security personnel ground versatility in securing his locations.