The number is peppered with his signature expression, "Lovely" and the new and unmissable line, "Don't know my name? MM MM". 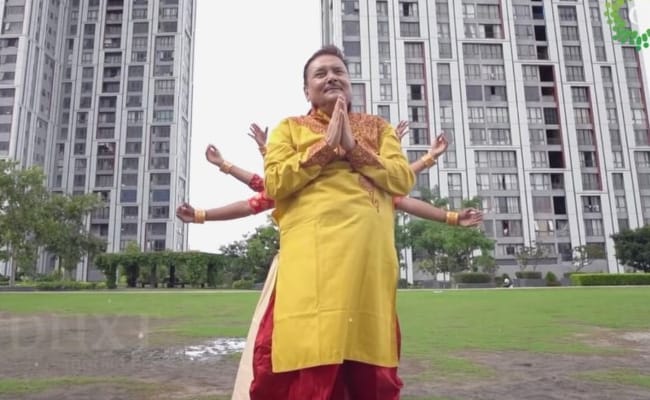 Trinamool Congress legislator Madan Mitra, known for his quirky social media presence, has come up with a music video that tries to capture the flavour of two eagerly awaited events for West Bengal -- Durga Puja and the Bhabanipur bypoll that Mamata Banerjee needs to win to stay Chief Minister.

The MLA is seen in the video singing - and rapping -- a number, "India Wanna've Her Betiya (India wants her daughters)". The performance begins with "Jago tumi jago" from the "Mahalaya" songs that are an inseparable part of Durga Puja. Madan Mitra then moves on to rap and his attire also makes a sudden transition from Bengali traditional to a funky shirt and a cap. At one point, he has a chain of rice lights around his neck and for a few seconds in the video, he is also dressed as a priest.

The number is peppered with his signature expression, "Lovely" and the new and unmissable line, "Don't know my name? MM MM", to which a chorus joins in as Mr Mitra switches between a guitar and a tanpura.

Cameos are performed by dancers in traditional sarees and an artist dressed as "Goddess Durga".

What is also significant is the political messaging. "India wanna've her betiya" is unmistakably a play on "Bangla nijer meyeke chai", the Trinamool's slogan for the Assembly polls when it projected Ms Banerjee as the daughter of Bengal taking on the "outsider" force of the BJP. The lyrics proceeds, "Bhabanipur to Kamarahati, West Bengal to Desher Mati, Mamatar haath dhore samne hanti," underscoring a role for the Trinamool supremo on the national stage.

The song also takes a swipe at the BJP using colloquial expressions and a reference to freedom fighter Matangini Hazra -- Prime Minister Narendra Modi had recently faced criticism for saying Matangini Hazra was born in Assam.

A former state minister and MLA from Kamarhati, Mr Mitra was jailed in connection with the Saradha chit fund scam. He was later granted bail and was elected to the Assembly earlier this year. More recently, he was arrested by the CBI in connection with the Narada sting operation before being released on bail.