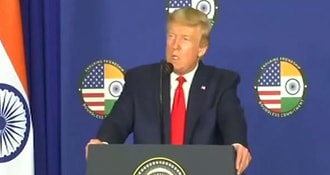 India has "probably the highest tariffs in the world and this has to stop, at least with the United States", US President Donald Trump said on Tuesday in response to questions about a possible trade deal between India and America. Speaking at a press conference in Delhi, on the final day of his first official trip, he cited high tariffs imposed on US-made Harley Davidson motorcycles and struck a defiant note when asked about a trade deal, saying an agreement would have to be "reciprocal".

"Relationship with India is magnificent - but the deficit is 24 billion (as per the US government, goods and services trade deficit with India was $25.2 billion in 2018). They (the Indian government) have high tariffs... too high. You can't do that," Donald Trump said.

"Harley-Davidson has to pay tremendous tariffs when they send motorcycles here and when India sends to us, there is virtually no tariff," Mr Trump added.

Hopes two of the world's largest economies would agree a trade deal faded in recent days after differences over proposed tariffs by India to protect domestic manufacturers. This happened after the US scrapped a system of preferences that allowed the export of $5.6 billion of goods.

Ahead of Mr Trump's talks with Prime Minister Narendra Modi on Tuesday, news agency Reuters quoted a White House official as saying: "We want to make sure we get this balance right. We want to address a lot of concerns and we're not quite there yet".

Trade talks have been hampered by a clash between the United States' "America First" slogan and India's "Make in India" outlook.

While minor compared to his trade war with China, Mr Trump has slapped tariffs on Indian steel and aluminum and suspended duty-free access for certain goods in an effort to cut the deficit. India responded with higher tariffs on US goods, including $600 million worth of Californian almonds.

Nevertheless, Mr Trump offered hope that a deal was not impossible, saying "lots of productive work has been done in last two days... we are working on a major trade deal".

One big-ticket deal has already been announced - the US will sell $3 billion worth of military equipment, including helicopters, to India.

Donald Trump is in India for a two-day state visit that concludes on Tuesday evening.

On Monday Mr Trump and PM Modi addressed a crowd of more than a lakh at the newly-built Sardar Vallabhbhai Patel Cricket Stadium in Gujarat's Ahmedabad, where the two leaders praised on each other. Later in the day Mr Trump and First Lady Melania Trump received a special tour of the Taj Mahal in Agra.