Throughout his tour of five countries, President Trump made a point of labeling the region the "Indo-Pacific." 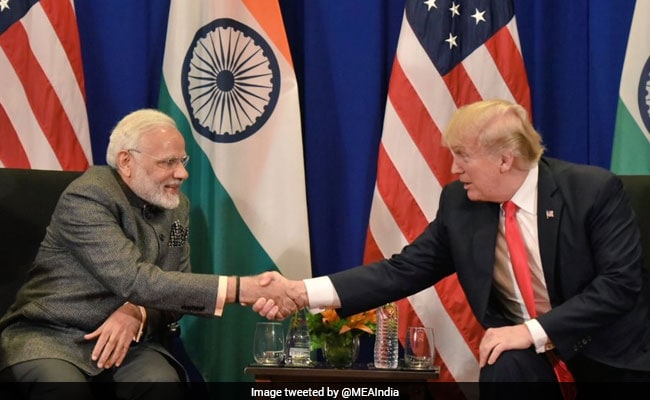 During his first presidential trip to Asia, Donald Trump has developed a sudden affinity for a phrase that gives some insight into how the US views the region.

Throughout his tour of five countries, President Trump made a point of labeling the region the "Indo-Pacific." Not "Asia." And not the more common "Asia-Pacific," which was what predecessor Barack Obama mostly used.

In a speech to business leaders on Friday in Vietnam, Mr Trump repeatedly called for a "free and open Indo-Pacific," describing a region where independent nations could "thrive in freedom and peace" and all states "play by the rules." He also used the phrase repeatedly at the start of a meeting Monday in the Philippines with President Rodrigo Duterte.

His choice of words reflects the desire of the US for India, the region's third-largest economy, to play a bigger role in its security matters. As China expands its economic and military clout, India could offer a potential buffer for smaller states, especially in Southeast Asia.

According to an administration official who asked not to be identified talking about policy, using "Indo-Pacific" helps reinforce the message that security in the region is underpinned by freedom of navigation at sea. That's because it allows the US to group together concerns about two key maritime trade routes that collectively link Asia to the Middle East and Europe.

In recent years China has undertaken massive land reclamation in the disputed South China Sea and built military structures there. The waterway carries a large chunk of the global container shipping trade each year.

India meanwhile has sought to push back against China in the Indian Ocean. China has financed port projects in Sri Lanka and Pakistan, spurring a theory known as the "string of pearls," whereby China builds a network of commercial facilities it can later turn into military bases.

According to another senior US official, the phrase "Indo-Pacific" is intended to stress the US and India as "bookends" in Asia.

In embracing the term, President Trump is borrowing from the U.S. foreign policy establishment, who in turn borrowed it from Australian policy wonks.

"It's good for India because it presents the prospect of an Indian role in the Asia-Pacific balance of power system," said C. Raja Mohan, director of Carnegie India. "If you want to boil it down, it's America saying they want a greater Indian role."

President Trump met Prime Minister Narendra Modi on Monday in Manila and called him a friend and a "great gentleman."

PM Modi replied that U.S.-India ties went beyond the two countries. "Whatever the expectations are of the world, of the United States, from India, India has always worked and made efforts to do our bit and to fulfill those expectations," PM Modi said.

Senior diplomats from Japan, Australia, India and the US met in Manila the previous day and "discussed measures to ensure a free and open international order based on the rule of law in the Indo-Pacific," according to a statement from Japan's Foreign Ministry.

Rory Medcalf, head of the National Security College at the Australian National University, first heard Australian diplomats discussing the term as early as 2005, but says it dates back to the 1960s and even to colonial times.

"It is now significant that it's being used at the highest levels of the US administration," he said. "This isn't just a Trump thing. It's being used by the Pentagon and State. I think it will outlive Trump."

The concept featured in the Australian government's 2013 defense white paper. Japanese Prime Minister Shinzo Abe has promoted links between the Indian Ocean and the Pacific for more than a decade, Medcalf said, and the term is now part of official policy documents.

Then-Secretary of State Hillary Clinton lent on the idea as she introduced the US strategic and economic "pivot" to Asia. She referenced the "Indo-Pacific basin" in a 2010 speech in Hawaii and in 2011 penned an op-ed in Foreign Policy magazine, saying the US was expanding its alliance with Australia to make it an "Indo-Pacific one."

Pacific Command chief Harry Harris has touted the phrase "Indo-Asia-Pacific" since at least 2014 and uses it in speeches. Secretary of State Rex Tillerson referred to the "Indo-pacific" 19 times in a speech in October on ties with India. And when National Security Adviser H.R. McMaster previewed Trump's trip he said President Trump had made 43 calls to "Indo-Pacific leaders."

"McMaster has been the one who's most vocal about the term," said Aaron Connelly, a research fellow at the Lowy Institute's East Asia Program in Sydney. "He comes from that strategic community. He's a scholar as well as a solider."

There are tangibles behind the phrase. India has stepped up naval cooperation with the US and Japan, holding joint aircraft carrier and anti-submarine warfare exercises in the Indian Ocean this summer. It has extended a $500 million line of credit to Vietnam for defense purchases and trains naval officers from Southeast Asian countries.

After taking office, PM Modi upgraded India's "Look East" policy -- which sought to boost ties with Southeast Asia -- to what he called an "Act East" policy. That is designed to boost economic and strategic links with Japan, South Korea, Australia and Southeast Asia.

According to Mr Mohan, the "Indo-Pacific" describes a return to the way the region used to work.

"In the 1940s, the region was seen as an integrated one," he said. "Because India turned inwards and so did China, they were seen as separate from Southeast Asia. Now we're going back to seeing the region in a much more integrated way."

Still, China is in public sounding a sanguine note about Trump's adoption of the phrase.

There wasn't much discussion about the "Indo-Pacific" at last week's Asia-Pacific Economic Cooperation summit in Vietnam because the forum is about the "Asia-Pacific," Zhang Jun, an economic affairs official at China's foreign ministry, said on Saturday in a briefing.

Promoted
Listen to the latest songs, only on JioSaavn.com
And India has pressing domestic and South Asian security challenges -- like Pakistan -- that will limit its involvement in Southeast Asia. It is also not keen to get caught up in the territorial tensions between China and other countries over the South China Sea.

In the South China Sea, "joint patrols might yet be a step too far," said Dhruva Jaishankar, a New Delhi-based foreign policy fellow at Brookings India. "Joint patrols are certainly possible in other parts of Southeast Asia" but for India "naval capacity remains a long term challenge."

No "Point In Protesting Against Pathaan" As...: Madhya Pradesh Minister