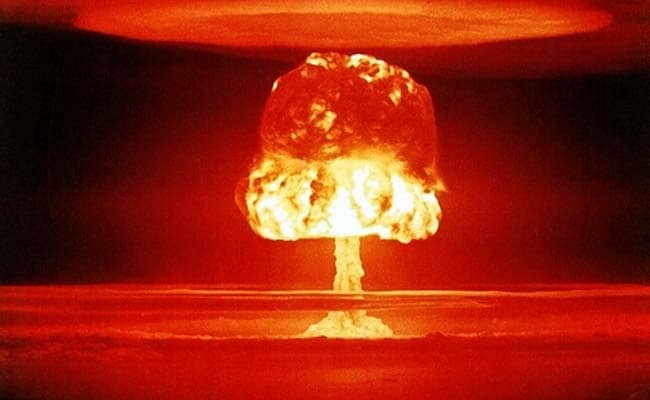 Mumbai: More than a Hiroshima or Nagasaki-type atom bomb today, security agencies worry about the use of a 'dirty bomb', especially by terrorists.

So how dangerous is a 'dirty bomb' or an explosive-laced with radioactive material?

On the eve of the anniversary of the Pokhran explosions, K S Pradeepkumar, head of emergency preparedness for India's main nuclear laboratory Bhabha Atomic Research Centre in Mumbai, busts some of the commonly held myths about dirty bombs and says India is well prepared to detect such devices thanks to a countrywide network. Excerpts from an interview:

Q: These days there is a lot of fear of something called a 'dirty-bomb'. What is a dirty bomb?

A: Dirty means it is dirty, that is it will not really harm you but it makes you uncomfortable. See it is like getting dirt on your dress that does not mean you are going to die or that your health is in trouble but definitely, you have to go and change your dress.

Therefore, it is not in terms of a casualty or a serious injury we are worried about a dirty bomb, or what is called a radiological dispersal device. The concern is about the fear it may inject into the people because very large number of people will believe that they are all affected because they are all contaminated. It causes disruption.

Q: But what are the materials, which can be used to make a dirty bomb?

A: First of all a dirty bomb has never been used anywhere in the world. Nevertheless, it is mentioned that there were attempts made where people have tried to make one using radioactive Cesium-137 and explosives like RDX. It has never been used in India.

What is feared is that since the use of radioactive sources and radioisotopes is increasing in a very significant way world over. Moreover, in some places the security of sources is not fully ensured. Hence, there are cases of lost sources, misplaced sources etc.

Q: In India, do we have the capability to detect hidden dirty bombs?

Q: There are some stories going around which say that if an explosive device like a dirty bomb is exploded let's say, in the heart of Delhi then all of Connaught Place will be obliterated and radiation will spread up to the Parliament Building, and all around several kilometers would get affected. In your assessment in the worst-case scenario what would be the situation?

A: Let me explain, the word 'affected' has to be used very carefully. See, we have highly sensitive radiation monitors. With this, even extremely small quantity of radioactivity can be detected. See for example, let me take the Fukushima accident, people detected extremely small doses of radioactivity as far away as in Europe and USA, and people started predicting everybody will be affected and there will be cancer.

It was wrong, okay, so what I want to tell is the radioactivity in the environment was extremely small, nevertheless, the scientists could detect it. Same way, if there is an explosion of a dirty bomb, what you have called it; there can be presence of radioactivity slightly above the natural background, even in 3-4 kilometers because it can be transported by the wind. Nevertheless, if you ask me the question, even that radiation level will not be even one thousandth of the radiation level of what you are having in the high background dose area of Kerala where people are living for many-many generations.

So I will not like to use the word, people will be 'affected', but definitely nearby area may be around 30-50 meters from where a dirty bomb is exploded it can have high level of contamination, beyond that there can be a cigar shaped area where spread of contamination will take place. That also may be 80 meters or slightly more than that, but it all depends upon what is the source you are using. I can tell you, more than 1.5 kilometer one need not bother at all. Again, I am telling, it may be possible to detect even up to 3 kilometer etc but that is not a concern.

Q: So, in case of a dirty bomb, what I understand is that the possibility of people dying is because of the thermal part of the bomb, and not because of the radiation. Is that what you are suggesting?

A: Yes, I think I have to make it very specific, when you talk of a 'dirty bomb'; we are talking about an explosive mixed with a radioactive material. When we use the word radiological dispersal device, it is of two types. One is a dirty bomb, where there is an explosive involved.

Another is just a dispersal of the radioactive powder in the public domain. However, in any case, if we are talking about a dirty bomb, it will have the same effect like any other explosive, blast effect, thermal effect, etc and added to it there will be a radioactive fallout.

What I want to tell is, any death or serious injury to the people will be limited due to the blast and thermal effect because of the explosive power. Radioactive fallout and radiation exposure is not going to cause serious health effects.