Woman Almost Got Drowned By A Crushing Sea Wave In Diu, A Stone Saved Her

While offering water to the Shivalingam, located at the sea front, a woman got swept away by a big wave of water in Gangeshwar Mahadev temple in Diu. 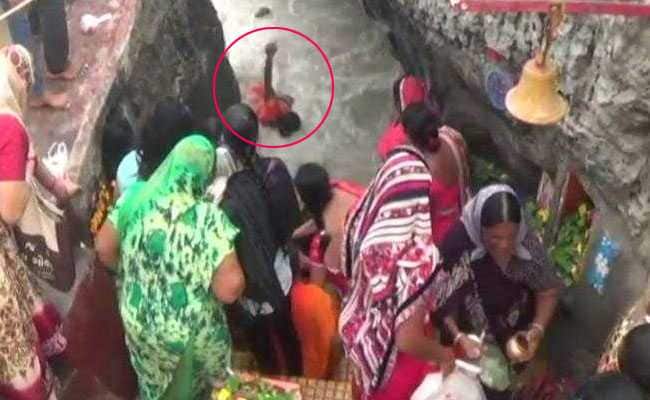 The woman got swept by a big wave of water while she was offering water to the Shivalingam.

In a miraculous escape, a woman who almost got drowned by a crushing sea wave saved herself by clutching onto a stone in the coastal town of Diu.

Rasilaben Solanki was among the group of women who was offering prayers at the Gangeshwar Mahadev temple, a water-front Hindu temple dedicated to Lord Shiva.

While offering water to the Shivalingam or icon of Lord Shiva, located at the sea front, Ms Solanki got swept away by a big wave of water, reports news agency ANI.

As the woman was being swept along the water flow, she held on to a stone and was saved with the help of other devotees around.

The incident took place on the first Monday of Shravan, the fifth month of the Hindu calendar. In this month, the devotees of Lord Shiva go for pilgrimages, keep fasts and offer holy Ganga water to Shiva icons around the country. Devotees walk from their states to Haridwar in Uttarakhnd to fetch holy Ganga water in pots and offer it to the local shrines dedicated to Lord Shiva. The month is also connected to the arrival of the South-West monsoons.