Anshul Chhatrapati, son of the killed journalist, welcomed the verdict and said they were now hopeful of getting justice too. 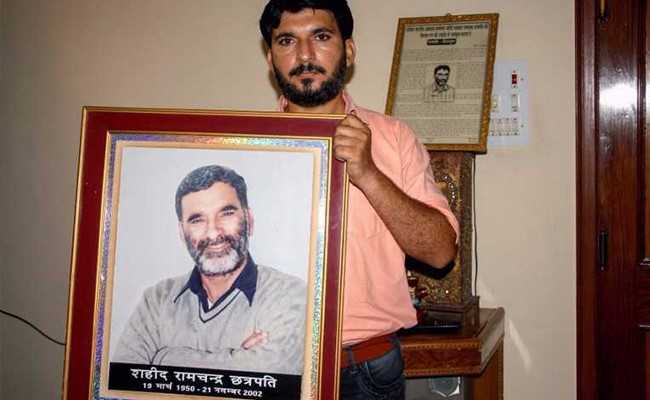 Chandigarh: The conviction of Dera Sacha Sauda head Gurmeet Ram Rahim Singh by a CBI court has come as a "ray of hope" for the family of Sirsa-based journalist Ram Chander Chhatrapati, who was killed for allegedly exposing the rape cases against the sect head 15 years ago.

Anshul Chhatrapati, son of the killed journalist, welcomed the verdict and said they were now hopeful of getting justice too. "Notwithstanding the pressure, the CBI judge by his verdict on Dera head has sent a clear and loud message that fraud seers cannot walk scot-free. The common man has now reposed his faith in judiciary," he said.

"Our father's case is also being heard by the same judge. The hearing is slated for September 16," he said. Mr Chhatrapati, who had exposed the sexual exploitation of sadhvis (women disciples) at the Dera headquarters in Sirsa, was shot dead from point blank range at his residence on October 24, 2002.

The 36-year-old son of the journalist also hailed the two women disciples for standing firm on their testimonies against the Dera chief despite "numerous threats". In January 2005, Anshul Chhatrapati had filed a petition in the Punjab and Haryana High Court for a CBI inquiry into the death of his father.

Mr Chhatrapati ran a local daily Poora Sacch. He was shot dead a few months after he published an anonymous letter narrating how women were being sexually harassed by Dera chief Gurmeet Ram Rahim at the Dera headquarters in Sirsa.

The three-page letter, written by a former sadhvi, was addressed to then Prime Minister Atal Bihari Vajpayee, Chief Justice of the Punjab and Haryana High Court and others, accusing the Dera chief of sexually assaulting them, Mr Anshul said.

Promoted
Listen to the latest songs, only on JioSaavn.com
"The letter explained how the Dera chief was sexually exploiting his women followers at the sprawling Sirsa ashram on account of 'purity'," he said.

The High Court had ordered the CBI to register an FIR in the case on November 10, 2003.