Delhi Poll Of Exits Polls: The BJP will improve its 2015 Delhi election tally of 3, the exit polls have said. 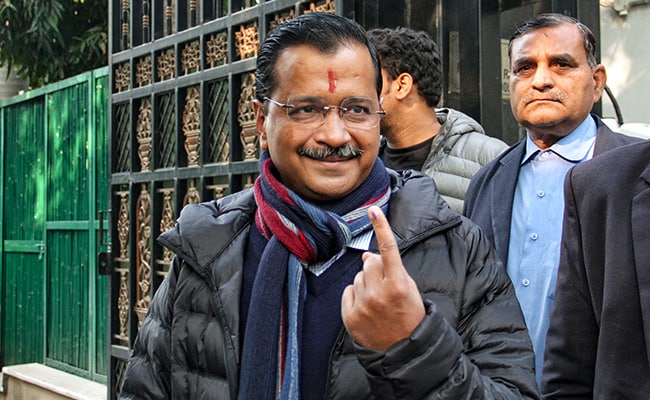 All the Delhi Assembly Election 2020 exit polls have predicted that the Aam Aadmi Party will retain power with a comfortable majority. The BJP, however, will improve its 2015 Delhi election tally of 3, the exit polls have said. This implies Arvind Kejriwal may get another term as the Delhi Chief Minister. Union Minister Amit Shah has called a meeting of Delhi BJP members of parliament. Meanwhile, BJP MP Manoj Tiwari has said the exit polls will prove to be inaccurate. Delhi voted today to decide if Arvind Kejriwal's Aam Aadmi Party (AAP) will return to power or whether the BJP will make a comeback after 20 years out of power in the capital. The Congress, which had not won any seat in the 70-strong assembly in 2015, is also hoping against all odds to stage a comeback. The results of the election will be declared on Tuesday. NDTV's poll of exit polls give an aggregate of various exit polls. Health warning: exit polls often go wrong. Here are the poll of exit polls figures for Delhi Assembly Election 2020:

Despite a high intensity campaign, the voter turnout for the Delhi election has been low. Just 54.02 per cent people turned up to vote till 5 pm. The corresponding figure in 2015 was 67.5 per cent.

Chief Minister Arvind Kejriwal's AAP went into the election with the tough task of matching its 2015 performance, when it won 67 of 70 assembly seats in an unprecedented mandate. Mr Kejriwal's campaign focused on his government's work on fixing the city's hospitals and schools.

On the other hand, the BJP, which won all the seven parliamentary seats in Delhi in the national election last year, has attacked Mr Kejriwal and the Congress over the anti-Citizenship Amendment Act protest at Delhi's Shaheen Bagh. The party has said that by voting for it, people of Delhi will show their disapproval of the protest. The BJP, which has not yet named a contender for the Chief Minister's job, has called Mr Kejriwal a "terrorist" who makes false promises and sides with "anti-national" elements.

The Congress's campaign focused on the work done by late Sheila Dikshit during her three consecutive terms as the Delhi Chief Minister. The party's top leaders Rahul Gandhi and Priyanka Gandhi Vadra barely campaigned for its candidates.

Feb 08, 2020 20:37 (IST)
Delhi Chief Minister Arvind Kejriwal has called a meeting at his residence over the security of electronic voting machines. Manish Sisodia, Sanjay Singh and Prashant Kishor are part of the meeting.
Feb 08, 2020 20:12 (IST)
Poll Of Exit Polls Gives 56 Seats To AAP
The poll of exit polls, an aggregate of other exit polls, says the Aam Aadmi Party will win 56 out of 70 Delhi Assembly seats. 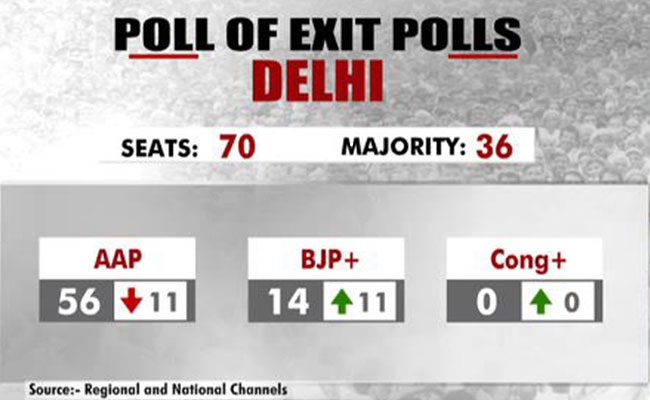 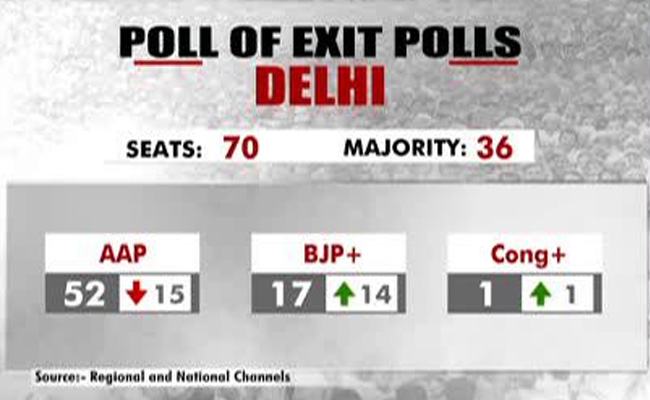 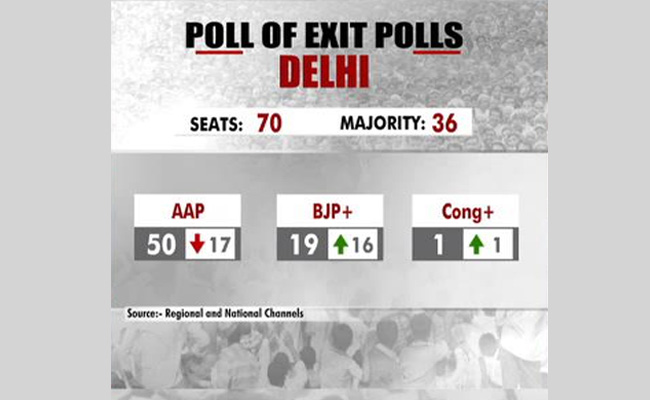 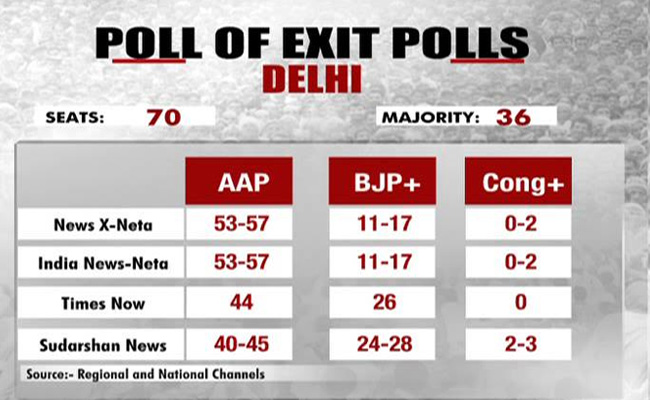 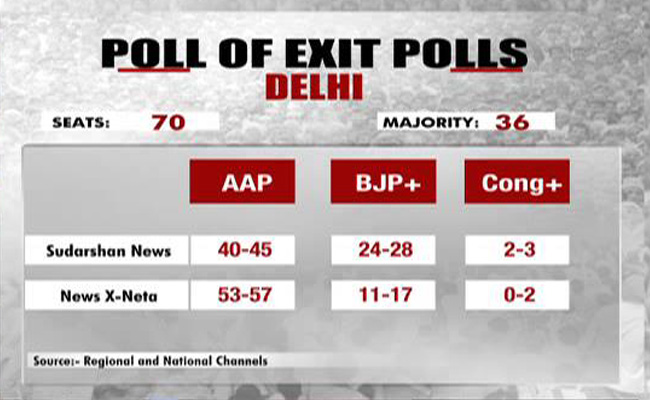 Feb 08, 2020 18:32 (IST)
Sudarshan News Exit Poll Predicts AAP To Win Delhi Polls
Sudarshan News predicts the Aam Aadmi Party is expected to win 40-45 seats; whereas the BJP is likely to won 24-28 seats. The Congress, which had not won any seats in 2015, will win 2-3 seats, it said.
Feb 08, 2020 18:30 (IST)
Determined to unseat Mr Kejriwal is the BJP, which hopes to build on its performance in the 2019 parliamentary polls when it won all seven Lok Sabha seats. The party, which has not yet named a contender for the Chief Minister's job, has called Mr Kejriwal a "terrorist" who makes false promises and sides with "anti-national" elements.
Feb 08, 2020 18:29 (IST)
Delhi Assembly Election 2020 Exit Poll Results
Delhi Chief Minister Arvind Kejriwal's AAP is hoping to repeat its 2015 performance, when it won 67 out of 70 seats in the assembly.
Feb 08, 2020 18:12 (IST)
Delhi Assembly Election 2020: Voting Ends
Voting for the Delhi Assembly Election 2020 has ended. The voting turnout has been relatively low. Polling figures that remained low through the day in Delhi, picked up towards the afternoon, touching 54.02 per cent by 5 pm. The corresponding figure in 2015 was 63.5 per cent.
Delhi Assembly Election 2020Delhi Election ResultsDelhi