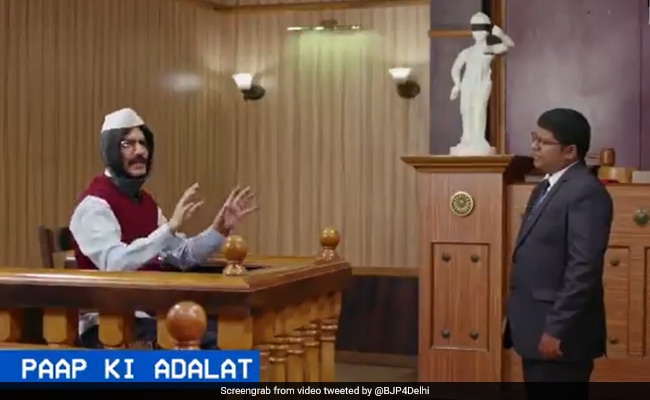 An actor mimicked Arvind Kejriwal in the video.

The Delhi BJP on Friday intensified its social media war with the ruling Aam Aadmi Party (AAP) by sharing a spoof video on Twitter to mock Chief Minister Arvind Kejriwal. In the video, titled "Paap Ki Adalat", an actor describes Mr Kejriwal's lookalike as "someone who behaves like a novice" and "who takes a U-turn on everything". The AAP branded it as "boring content".

"The leader who got his political tummy on the basis of Anna's hunger, the leader who fooled voters with his false promises, who broke people's heart after taking their votes, Delhi's chief, who behaves like a novice, who takes a U-turn on everything, who performs gimmicks...," the actor says in his introduction to Mr Kejriwal's lookalike, who soon comes in front of the camera.

Mimicking Mr Kejriwal, his lookalike then takes an oath saying he would only say the truth in the interview. "And even if I lie, there is no problem, as I can later take a U-turn," he says. The actor also says that he considers people of Delhi "a vote bank".

The seven-minute video, tweeted to ridicule AAP and Mr Kejriwal, has over 2,400 retweets.

The AAP was not amused. "So much effort to ridicule one man. Is this all you got ? PS : Boring content. If you need any advice on content or satire please get in touch with us," it tweeted from its official handle.

So much effort to ridicule one man. Is this all you got ?

PS : Boring content. If you need any advice on content or satire please get in touch with us. https://t.co/OjZrkNOPsy

"Burnt? This is just the beginning," the BJP retorted, sharing a meme with actor Akshay Kumar's picture.

This comes days after Mr Kejriwal and Delhi BJP chief Manoj Tiwari exchanged jibes on Twitter over the BJP's promise that it would offer five times more subsidy than the Aam Aadmi Party (AAP) government on power and water bills in the city if voted to power.

Mr Kejriwal is hoping to get his second successive term as Chief Minister by winning the Delhi Assembly election, polling for which will take place on February 8. His party has said it will return to power, and will better its 2015 tally of 67 in the 70-strong assembly.