During in-camera proceedings, District Judge Dharmesh Sharma had said he was likely to pronounce the verdict on December 16 after conclusion of hearing of final arguments by the CBI and the accused in the case. 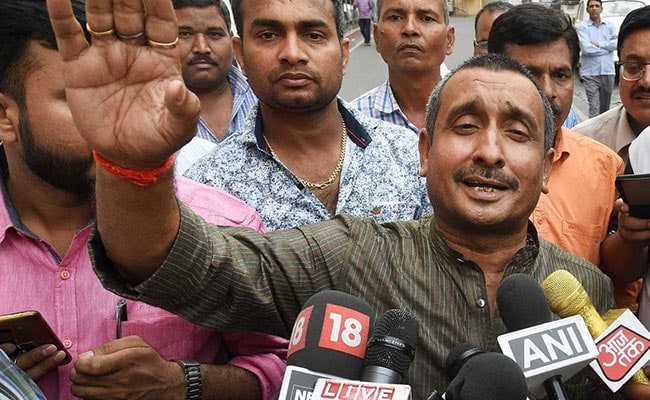 Kuldeep Sengar, a four-time BJP MLA from UP's Bangermau, was expelled from the party.

A Delhi court is likely to pronounce its judgement at 3 pm on Monday in the case of alleged kidnapping and rape of a woman by expelled BJP MLA Kuldeep Singh Sengar in Unnao in 2017, court sources said.

The woman was allegedly kidnapped and raped by Sengar in 2017 when she was a minor. The court has also framed charges against co-accused Shashi Singh in the case. Sengar, a four-time BJP MLA from UP's Bangermau, was expelled from the BJP in August 2019.

The court had on August 9 framed charges against the MLA and Singh under Sections 120 b (criminal conspiracy), 363 (kidnapping), 366 (kidnapping or inducing a woman to compel for marriage), 376 (rape) and other relevant sections of the Protection of Children from Sexual Offences (POCSO) Act.

During in-camera proceedings, District Judge Dharmesh Sharma had said he was likely to pronounce the verdict on December 16 after conclusion of hearing of final arguments by the CBI and the accused in the case.

The judge heard the case on a day-to-day basis from August 5 after it was transferred to Delhi from a court in Lucknow on Supreme Court's directions.

On July 28 this year, the car of the survivor was hit by a truck and she was severely injured. The woman's two aunts were killed in the accident and her family had alleged foul play.

Her father was allegedly framed in an illegal arms case and arrested on April 3, 2018. He died while in judicial custody a few days later, on April 9. The local court here has framed murder and other charges against the MLA, his brother Atul and nine others in the case.

The top court, taking cognisance of the rape survivor's letter written to the Chief Justice of India Ranjan Gogoi, had on August 1 transferred all five cases registered in connection with the Unnao rape incident from a Lucknow court in Uttar Pradesh to the court in Delhi with directions to hold trial on daily basis and completing it within 45-days.

The trial in the other four cases -- framing of the rape survivor's father in illegal firearms case and his death in judicial custody, conspiracy of Sengar with others in the accident case and a separate case of gangrape of the rape survivor by three others -- are ongoing in the court.

During the trial in the rape case which was held in-camera, thirteen prosecution witnesses and nine defence witnesses were examined. The mother of the rape survivor and her uncle were the main witnesses in the case.

A special court was also held at AIIMS hospital here to record the statement of the rape survivor, who was admitted there after she was air-lifted from a hospital in Lucknow.

The woman and her family is provided CRPF security as per the top court's orders. They have now been shifted to a rented accommodation in the national capital with the assistance of the Delhi Commission for Women (DCW).