The complainant had alleged the group broke a cupboard, drawers, kitchen items, windowpanes and mirrors in the house. 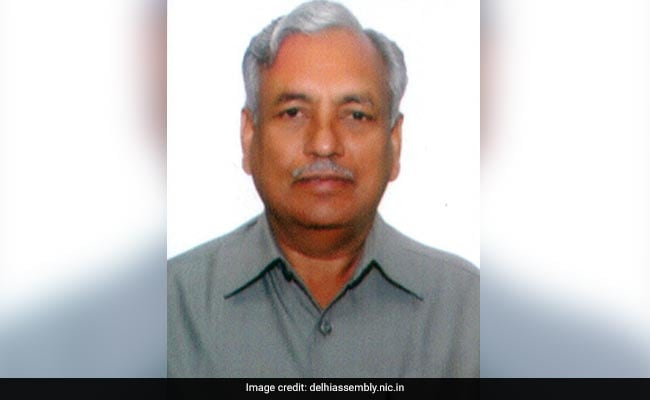 Delhi Assembly Speaker Ram Niwas Goel was on Friday awarded a six-month jail term by a court for trespassing on the house of a realtor in an East Delhi colony in 2015.

"I am of the view that the punishment needs to be deterrent in this case," the court said, while handing over simple imprisonment for a period of six month and a fine of Rs 1,000 each.

The court, however, granted them bail on a personal bond of Rs 1,00,000 to enable them to file an appeal before higher courts against the order.

The court had convicted the accused persons for the offence punishable under section 448 (house trespass) of the IPC.

Mr Goel, 72, had denied the allegations in the case.

He has said he will challenge the order in a higher court.

"I will file an appeal in the Sessions Court to challenge the order," Mr Goel said.

According to a first information report registered on a complaint by builder Manish Ghai, Mr Goel and his supporters had raided one of Mr Ghai's houses in Vivek Vihar on the night of February 6, 2015, a day before the Delhi Assembly elections.

Mr Goel had raided the house of Mr Ghai accusing him of stashing liquor, blankets and other things for distribution ahead of the polls, the FIR said.

The AAP members had refuted these claims, saying they had gone to the house with a police team comprising the local station house officer and assistant commissioner of police, among others after making a PCR call in this regard.

"As per the complainant, some labourers were staying at a house that was owned by him. He received a call from one of them at about 9.30 pm on February 6, 2015 about Goel and his associates forcibly entering the building and damaging the property," the police had said in the charge sheet.

Mr Ghai also alleged that the group broke a cupboard, drawers, kitchen items, windowpanes and mirrors in the house. When the labourers tried to resist, they were allegedly physically assaulted.