Tthe BJP and Mr Kumar's JD(U) had decided on a 50:50 division of seats. The BJP was expected to allot seats to the LJP out of its share before Ram Vilas Paswan's party made its announcement. 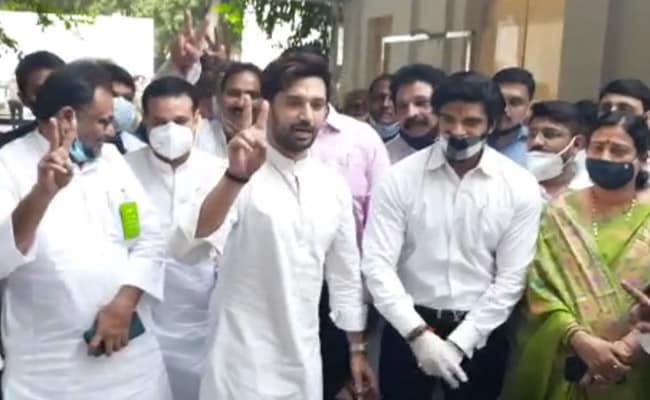 "This decision has been taken to make Bihar proud," Chirag Paswan wrote.

The move to contest the coming assembly elections against Chief Minister Nitish Kumar is a "big defining moment in the history of the state of Bihar," Lok Janshakti Party's Chirag Paswan said today in an open letter to the people of the state. Highlighting the party's "Bihar First Bihari First" slogan,  Chirag Paswan, who has dubbed himself "Yuva Bihari (Young Bihari"), tied yesterday's decision with Bihari pride.

"This decision has been taken not to rule Bihar but to be proud," read the letter. "This is the big defining moment in the history of the state of Bihar -- this is the question of life and death for 12 crore Biharis, we have no more time to lose," it added.

In its official statement after the crucial meeting in Delhi yesterday, the LJP made it clear that wanted the alliance with the BJP to continue even though it was spurning the leadership of Nitish Kumar.
No candidates will be fielded against the BJP and "all the candidates who win will form a BJP-LJP government", the party said, adding that there was no "sourness" in the relation with the BJP.

The stance left the BJP's role open to speculation. A section of NDA leaders suggested that Chirag Paswan's bold move -- targetting Nitish Kumar for months and then going solo -- would not have been possible without the tacit support of the top BJP leadership.

The BJP's tardiness in granting the LJP's request for an early decision on seats division also left room for suspicion, especially after the party gave am ultimatum on the issue after a meeting with BJP chief JP Nadda last week.

Prime Minister Narendra Modi and Amit Shah had made it clear that Mr Kumar -- a five-time Chief Minister -- will remain the face of the NDA in Bihar, over-riding objection from a section of the BJP's state unit leaders.

Yesterday the BJP and Mr Kumar's JD(U) had also decided on a 50:50 division of seats. The BJP was expected to allot seats to the LJP out of its share before Ram Vilas Paswan's party made its announcement.

Mr Paswan is in hospital, recuperating from a heart surgery.

Of the 122 seats in JD(U)'s share, seven seats will go to Jitin Ram Manjhi's HAM. Of the BJP's 121 seats, some seats will be given to Mukesh Nishad's Vikassheel Insaan Party.