Days After Inauguration By PM, Parts Of UP's Bundelkhand Expressway Damaged In Rain

The four-lane expressway of 296 kilometres connects Bharatkoop in Chitrakoot with Kudrel in Etawah, passing through seven districts. 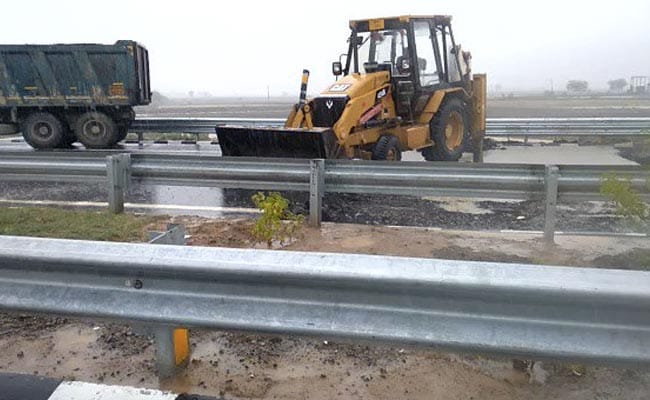 Bundelkhand Expressway being repaired near Salempur

Parts of the Bundelkhand Expressway caved in after rain yesterday, within a week of its inauguration by Prime Minister Narendra Modi on July 16.

The four-lane expressway of 296 kilometres connects Bharatkoop in Chitrakoot with Kudrel in Etawah, passing through seven districts.

It has caved in at Chhiriya near Salempur, where two cars and a motorcycle got into accidents last night.

A similar cave-in was seen near Ajitmal in Auraiya.

Some news reports quoted officials as saying repairs have already been carried out.

The project is worth nearly Rs 8,000 core, and has the capacity to be widened to six lanes.

According to the state's expressway authority, this road will link the Bundelkhand area to "a fast and smooth traffic corridor", comprising the Agra-Lucknow and Yamuna expressways. It will lead to "omni-directional development" of the region, it says.

The plan is to shorten the link for manufacturing units and farming areas with Delhi. An industrial corridor will be developed too, the authority website adds. "The expressway will act as a catalyst for establishment of handloom industry, food processing units, storages, market, and milk-based industries," it further says.

Bundelkhand region, geographically and culturally, is spread across at least 13 districts -- seven in UP and six in Madhya Pradesh.