Union Minister Giriraj Singh had warned those who refuse to chant "Vande Mataram" or "Bharat Mata ki Jai" yesterday at a rally. 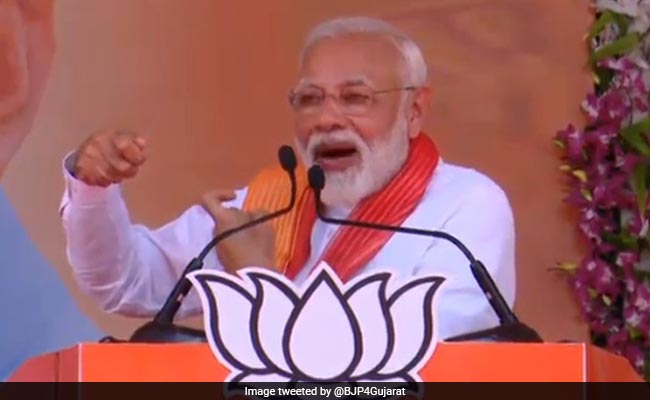 Union Minister Giriraj Singh's warning to those who refuse to chant "Vande Mataram" or "Bharat Mata ki Jai" was endorsed by Prime Minister Narendra Modi today, but it came attached with a milder penalty. "Such candidates should have their deposits forfeited," said the Prime Minister, who was campaigning for the BJP candidate in Darbhanga.

"I want to say who don't say Vande Mataram, can't worship the motherland - Giriraj's father and grandfather died on the Simaria ghat by the banks of the Ganga and did not need a grave. You on the other hand, need three-arm's-length of land. If you don't do it, the country will never forgive you," he added.

Today, the Prime Minister, who was sharing stage with allies Nitish Kumar and Ram Vilas Paswan, said: "Chanting Vande Mataram is like a life force. Doing this is also a responsibility to ensure the peace, prosperity and security of the country. But some people have a problem with this. They should have their deposits forfeited."

The singing of the national anthem in public places and on public occasions has been mandatory in the BJP-ruled states and since 2014, across the country. But it has generated friction with Muslims, who object to it on religious grounds.

For this election, the BJP has made nationalism and national security its key themes and with it, the debate over Vande Mataram has grown as a spin-off.

At the rally, the Prime Minister said: "Please tell me if Rashtravad (nationalism) and terrorism are issues in these elections or not". As the crowd shouted approval, he cited Sunday's serial blasts in Sri Lanka, in which 359 people have died.

"Over the last 40 years, terrorism has affected the welfare programmes in our country," he said. Programmes like construction of schools or hospitals were hit as huge amounts were spent on providing security to politicians and maintaining security in public places, he said.

"We have to purchase bombs, pistols and guns, but we could have built more hospitals and schools with the same funds," he said.

Darbhanga votes for the Lok Sabha elections on April 29 on Phase 4. The counting of votes will be held on May 23.