At Yogi Adityanath's rally in Bisada village of Greater Noida, where the killing took place, four of the accused, including main accused Vishal Rana, were seen cheering from the front row.

Vishal Rana (third from right) were seen in the front row at the Yogi Adityanath rally in Bisada.

A group of men accused of beating a Muslim man to death in 2015 over beef rumours in Uttar Pradesh's Dadri had front row seats at a rally on Sunday of Chief Minister Yogi Adityanath, who was campaigning for the national election starting April 11.

Mohammad Akhlaq's alleged killers are out on bail.

Four of them, including main accused Vishal Rana, were seen cheering from the front row when Yogi Adityanath addressed an election rally in Bisada village of Greater Noida, where the killing took place.

55-year-old Mohammad Akhlaq was dragged out of his home and lynched by a mob in September 2015 over suspicion that he had killed a cow and stored its meat in his freezer. His son Danish was also beaten up brutally. Akhlaq's family was forced to leave the village in the tense aftermath of the killing that left the area divided. 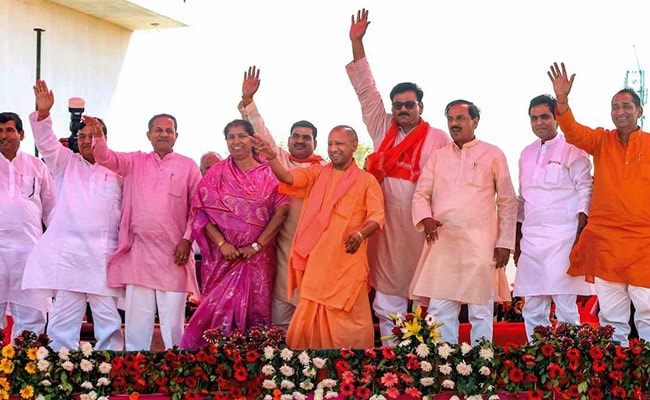 Yogi Adityanath raised the incident at the rally, saying: "Who doesn't remember what happened in Bisara? Everybody knows it. How shamefully the Samajwadi Party government tried to suppress the sentiments then. I can say as soon as our government was formed we got all illegal slaughter houses stopped in one go and ensured its strict implementation."

The saffron-wearing Chief Minister was campaigning for the BJP candidate in the constituency, Mahesh Sharma.

He accused the Samajwadi Party and the Bahujan Samaj Party (BSP) governments in the past of "dividing people on the basis of caste" and practising the "politics of appeasement". Both parties had only worked for the development of their families, engaged in appeasement politics and destroyed the social fabric of the country, said Yogi Adityanath.

"But ever since Narendra Modi became the prime minister in May 2014, our government had said that it would not work for individuals, families, caste, or religion, but work for villages, the poor, youth, women, farmers and for every section of the society," Yogi Adityanath said.

"Earlier there was Congress at the centre, its supremo had said that a certain community has the first right on the country's resources and by saying this, the party divided the majority and so did the SP and BSP governments. But PM Modi said his government would work for every section of the society and showed the will to walk his talk. The results of that will power can be seen today," he said.

The chief minister also alleged that in previous regimes, riots would breakout in western UP "every now and then and one side action was taken to insult the majority community". False cases were filed against Hindus, which created a "breeding ground" for riots, he said.

"In my two years, has there has been any Bisada-like incident in the state? Has there been safety concern to sisters and mothers? No. This cannot happen because we have said that we will guarantee safety and development to 23 crore citizens of the state, bring every one into mainstream. We won't differentiate between people but won't engage in appeasement politics," he said.