"Cyclone Yaas To Be More Severe Than Amphan": Mamata Banerjee 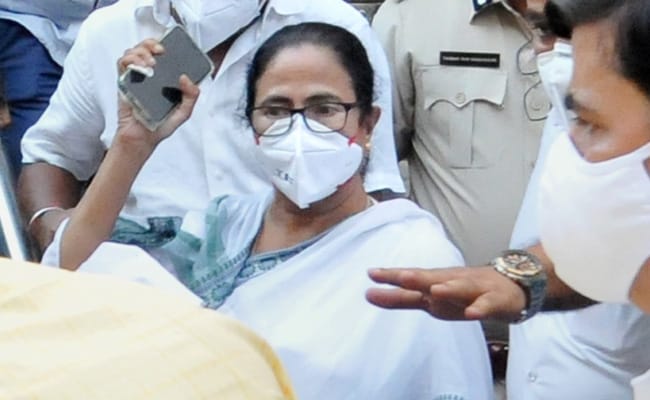 Chief Minister Mamata Banerjee said on Monday that the West Bengal government has made all necessary arrangements in dealing with the aftermath of cyclone Yaas, which might affect 20 districts of the state.

Addressing a press conference, Ms Banerjee said the state is targeting to shift at least 10 lakh people to safer places in a bid to avoid any loss of life.

"Cyclone Yaas's impact is going to be much more than Amphan, according to the information we have received so far. This is going to affect at least 20 districts in West Bengal. The districts of Kolkata, North and South 24 Parganas and Purba Medinipur will be severely affected," she said.

The districts of Howrah, Hooghly, Bankura, Birbhum, Nadia, Paschim and Purba Bardhaman, Paschim Medinipur, Murshidabad, Jhargram, Purulia would also be affected by the cyclone, she said.

In Malda, Uttar and Dakshin Dinajpur, Darjeeling and Kalimpong there is a forecast of rain, Ms Banerjee added.

The calamity will continue for 72 hours, she said.

"The state government has banned all forms of tourism in the coastal areas as well as fishing activities in the sea," the chief minister said.

"District administrations and police have been asked to deal with violations strictly to prevent any loss of life," she said.

At least 51 disaster management teams have been readied, keeping in view the possible devastation predicted by experts, Ms Banerjee said.

Ferry services at 13 places have been shut, she said, assuring that the state has sufficient stock of relief materials that are kept ready at the block level.

"From Tuesday, we will continue surveillance for the next 48 hours from the control room at the state secretariat. Control rooms have also been made operational at district and sub-division levels," the chief minister said.

Extensive plans have been adopted for hospitals and vaccine centres, Ms Banerjee said, adding that all types of medicines -- on diarrhea, fever, snake bites -- have been asked to be kept ready.

At least 1,000 power restoration teams have been kept on stand-by and once the cyclone subsides, they will start working, she said.

"We have asked the Army, NDRF, SDRF to be on alert. All the agencies have been asked to be on stand-by so that we can use them when needed. We are ready for the cyclone," Ms Banerjee said.

"There is nothing to be scared of. We have taken all forms of precautionary measures. I will ask the people to cooperate and wear masks and maintain physical distance," she said.

The Kolkata port said it will suspend all operations from May 25 till the cyclone subsides. Kolkata Port Trust chairman Vinit Kumar said the decision was taken as a precautionary measure. Entering of ships has been halted, while cargo handling will be stopped at 2 pm on Tuesday and workers will be shifted to safety, he said. The movement of goods-carrying vehicles on the port roads will be halted at 6 pm.

The Kolkata airport authorities said all precautionary measures are in place to deal with any eventuality in the wake of the cyclone. Airport director Pulla Hezejiah told PTI that the arrow bridges are being locked, while the high-mast lamps are uninstalled.

Pumps have been kept ready to remove water from the low-lying areas in the airport compound, he said.

The small planes will be kept tied to the ground, while precautions are also being taken to prevent any damage to the large planes that were severely affected during Amphan, Mr Hezejiah said.

So far, Air Vistara has cancelled two flights on the Kolkata-Mumbai and Kolkata-Delhi routes on May 26, he said.

"A meeting was held during the day to take stock of the preparations and another meeting will be held on Tuesday to decide on the future course of operations," Mr Hezejiah said.

Several trains run by the South Eastern Railway have also been cancelled in the wake of the cyclone from Monday to Thursday. Among them are the Rourkela-Bhubaneswar special of May 25 and the Malda Town-Digha special of May 27, officials said.

CESC Ltd, which supplies power to Kolkata and adjoining areas, said it has engaged 2,500 men on the ground who will work round the clock for power restoration, following the cyclone.

State-run WBSEDCL that supplies power to the rest of West Bengal also issued helpline numbers 8900793503 and 8900793504 to report disruptions.

Cyclonic storm Yaas is very likely to make landfall near Balasore in north Odisha along the West Bengal border with a speed of 155 kmph to 165 kmph, gusting to 185 kmph, around noon on May 26, the Met department said.