PM Modi, accompanied by the Odisha Chief Minister, took the aerial tour of cyclone-hit districts such as Jagatsinghpur, Kendrapara, Bhadrak, Balasore, Jajpur and Mayurbhanj for about 90 minutes. 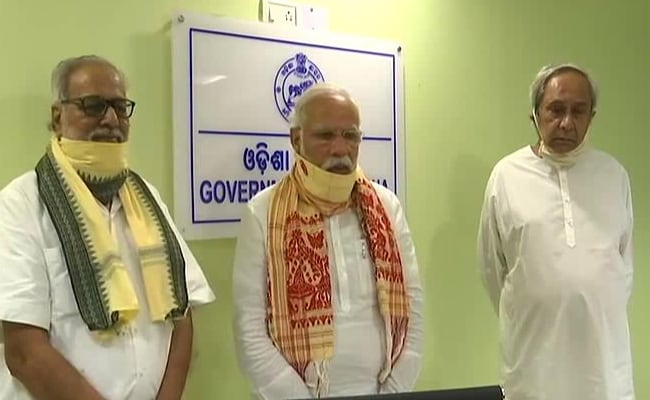 Prime Minister Modi this evening announced an advance financial assistance of Rs 500 crore for Odisha after an aerial survey of areas hit by cyclone Amphan and holding a review meeting with Governor Ganeshi Lal and Chief Minister Naveen Patnaik.

PM Modi, accompanied by the Odisha Chief Minister, took the aerial tour of cyclone-hit districts such as Jagatsinghpur, Kendrapara, Bhadrak, Balasore, Jajpur and Mayurbhanj for about 90 minutes.

"For the immediate need, the Government of India announces Rs 500 crore for Odisha, as a measure in advance. The Centre will further help the Odisha government and make rest of the arrangements to come out of this crisis, after the complete survey and the formation of a rehabilitation plan," Prime Minister Modi said.

The Prime Minister also said that though the Odisha government has been able to save lives by undertaking preparations well in advance, the cyclone has caused damage to housing, power and infrastructure, besides the agriculture sector while moving towards West Bengal.

Earlier in the day, PM Modi travelled to West Bengal and announced a Rs 1,000 crore relief package for the Amphan-battered state.

During the visit, while the Prime Minister used a scarf to cover his face, chief ministers of both the states were seen with face masks - an important measure to curb the spread of coronavirus.

PM Modi also announced Rs 2 lakh each for the families of those who died in the cyclone and Rs 50,000 for the injured.

80 people died in West Bengal after winds of up to 185 km per hour (115 mph), accompanied by a storm, caused flooding, blew away roofs, uprooted trees and ripped up power lines.

"The central and state government tried everything we could to minimise the damage from the cyclone. Still, we weren't able to save the lives of around 80 people," Prime Minister Modi said at a school in West Bengal's Basirhat during a stop on a tour to inspect the damage.