Lok Sabha elections 2019: The BJP also claimed EVM malfunction from various parts of the state, including in Jadavpur, the heart of Kolkata 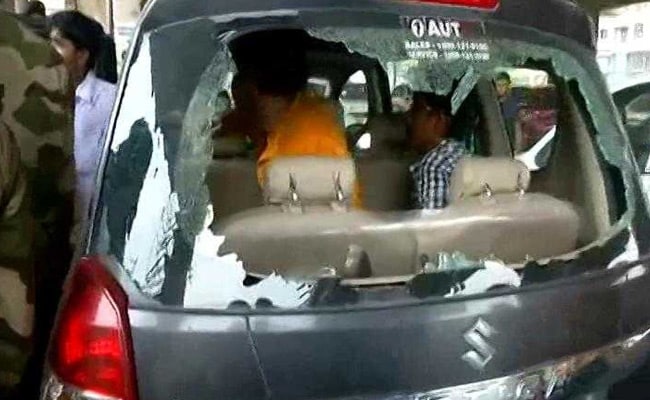 General elections 2019: A car damaged in the violence in North Kolkata constituency

Crude bombs, lathicharge and claims of attacks from candidates came from Bengal as polling is being held today on nine of the state's 42 Lok Sabha seats and one assembly seat in the last round of elections. Union Minister Nirmala Sitharaman has called for the presence of Central forces in the state till the counting of votes gets over. Bengal sends the second highest number of members to the Lok Sabha after Uttar Pradesh. The state is voting in all seven phases of elections and violence was reported during every round.

"We fear the TMC will carry out a concerted and synchronised round of violence post-election and that's why Central forces must remain there. The TMC has been persistent with their ideology of violence," Nirmala Sitharaman said. Asked about the BJP workers' involvement in violence, she said, "I think this is a weak argument. Everyone knows who is indulging in violence".

The Trinamool has blamed the BJP for the violence and accused Central forces of "taking orders from BJP, mercilessly beating up citizens and Trinamool workers". After casting her vote today, Chief Minister Mamata Banerjee said: "The torture that BJP workers and central forces have carried out today since the morning, is unprecedented. I have never seen anything like this before".

In Bhatpara, where Trinamool's former minister Madan Mitra is contesting against the BJP's Pawan Kumar Singh, the son of former Trinamul lawmaker Arjun Singh in by-polls for the state assembly, crude bombs were hurled by rival groups. The clash came under control only after the police used batons. The Election Commission has asked for a report.

Two BJP candidates from state capital Kolkata claimed they were attacked. The BJP also claimed EVM malfunction from various parts of the state, including in Jadavpur, the heart of Kolkata.

Rahul Sinha, BJP candidate for the North Kolkata seat, said he was attacked by a group of men and held at a school in Park Circus as people shouted "Go Back" slogans.

Anupam Hazra, expelled Trinamool leader who joined the BJP and is contesting from Jadavpur, said stones were thrown at his car. Similar complaints came from Nilanjan Roy, who is the BJP contender from the Diamond Harbour seat, where Mamata Banerjee's nephew Abhishek Banerjee is the sitting lawmaker.

There was also trouble when Mr Hazra walked into a poll booth with a huge security and media contingent and jammed the area, the voters got agitated and one person suffered a stroke.

The people started abusing him and the Trinamool workers asked him to leave.

In Jadavpur, the BJP claimed voters were being inked but not allowed to vote. A heated argument took place between two groups.

Trinamool's Derek O'Brien said the BJP was "as usual, hiding facts and lying to the country".

Trinamool's Moon Moon Sen, who is taking on Union Minister Babul Supriyo from the Asansol seat, said whatever is happening in Bengal is a "tiny bit of violence".

"Things have been polarised for the last six years and it wasn't the Bengalis. There may have been a bit of violence here and there like there are in other states... no one talks about the violence in the last five years in Uttar Pradesh," she said.