The optimism comes from the massive decline in new coronavirus caseloads in the top 15 districts which had the maximum infections, SBI Research said. 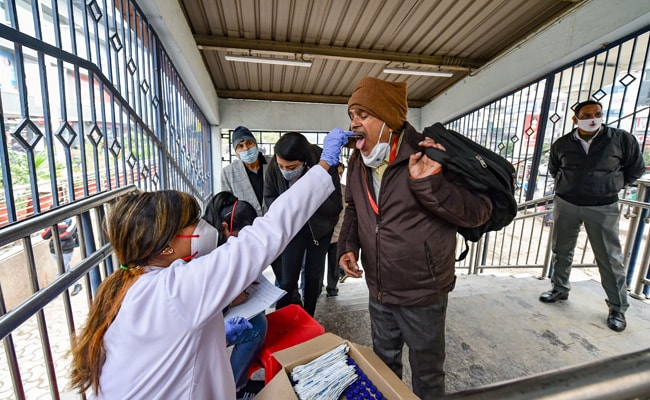 The third wave of the COVID-19 pandemic is likely to peak much earlier than anticipated and may take a maximum of three more weeks, even though the share of rural districts in new caseloads has increased significantly since December, says a report.

The optimism comes from the massive decline in new caseloads in the top 15 districts which had the maximum infections, SBI Research said in a report on Tuesday.

Infections in the top 15 districts have declined to 37.4 per cent in January, from 67.9 per cent in December.

The report, however, admitted that 10 of these top 15 districts are major cities and among them Bengaluru and Pune still have higher infection rates.

The overall share of rural districts in new cases has increased to 32.6 per cent in January, from the lowest of 14.4 per cent in December, the report noted.

In comparison to the US, this is too low, where the new cases have soared by 6.9 times even though it has double-vaccinated over 80 per cent of its eligible population.

Rural vaccination share in total vaccination is now at 83 per cent, indicating that the rural populace may be largely protected in the current wave.

Significantly, new cases in Mumbai seem to have peaked (20,971 cases on January 7) but cases in other districts (Bengaluru, Pune, etc) are showing an increase in daily new numbers.

So, if other districts also implement strict measures and control the spread, then the national peak may come within two-three weeks from now, Soumyakanti Ghosh, the chief economic advisor at SBI said in the report.

The rural caseload is led by Andhra, Bihar, Himachal, Jammu and Kashmir, Odisha and Rajasthan, and rural vaccination is lower in Arunachal, Gujarat, Haryana and Karnataka.