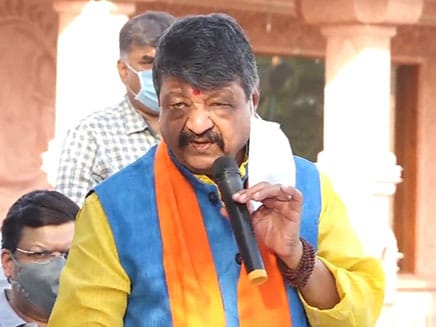 BJP's Kailash Vijayvargiya said everyone must stand with the nation during this crisis.

The devastating second COVID-19 wave sweeping through India over the past few months is China's "viral war" against the country, senior BJP leader Kailash Vijayvargiya today said. This is the moment we all must stand with the nation, he asserted.

This "viral war" is being waged to undercut the country's, and Prime Minister Narendra Modi's, standing globally, the party's in-charge of West Bengal said.

"This second wave of Covid, whether it has come or has been sent is a matter of discussion. Because if anyone in the world has challenged China, it was India and Modiji," Mr Vijayvargiya said, adding that the this wave was part of China's "toolkit" to malign the Prime Minister and diminish his popularity.

"The second wave has swept through only India. Neighbouring countries like Bangladesh, Pakistan, Sri Lanka, Bhutan, or Afghanistan haven't been affected. That's why I feel China is out to trouble India," he said.

The BJP leader was speaking in Madhya Pradesh's Indore during a programme to distribute oxygen concentrators in rural areas of the city.

He said "PM Modi had worked hard" to ensure oxygen supply across the country during this difficult period.

"The Army, Navy, and the Air Force were marshalled to get tankers-full of oxygen. Even trains were used. There was trouble for 5-6 days, of course, because it was difficult to estimate how much was needed," Mr Vijayvargiya said.

"We are not working for the party, but for the nation," he said, urging everyone to stand together at a time China was waging a war.