COVID-19 Vaccines "The Most Important Subject": S Jaishankar On US Meetings

"There was also of course the COVID-19 context because of the vaccine partnership between India and the US, and also Quad-based discussions on vaccines. That was also one of the important subjects. In fact, in many ways, I would say the most important subject of my discussion," Mr Jaishankar said. 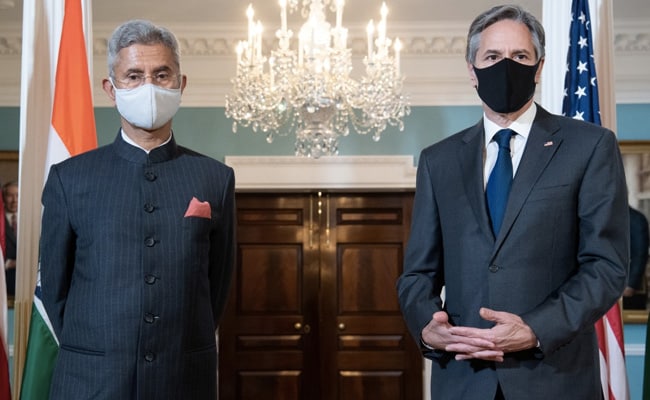 Calling COVID-19 pandemic and vaccines as one of the most important aspects of his discussions with top officials of the Biden administration, External Affairs Minister S Jaishankar today said the endeavour is to expand production of vaccines in India with assistance from the United States.

Mr Jaishankar, 66, is the first Indian Cabinet minister to visit the US under the Biden administration.

The primary focus of the visit obviously was on the relationship with the new administration. It is a very important relationship. Also, to engage with the senior cabinet members, he told a group of Indian reporters in Washington as he concluded most of his engagements.

"There was also of course the COVID-19 context because of the vaccine partnership between India and the US, and also Quad-based discussions on vaccines. That was also one of the important subjects. In fact, in many ways, I would say the most important subject of my discussion," the minister said.

He also held meetings with top officials from about a dozen departments of the administration. He also spoke with co-chairs of India Caucus, and Chairman and Ranking Member of the powerful House Foreign Affairs Committee.

Mr Jaishankar said he also met with business leaders in a meeting organised by the US India Business Council and US India Strategic and Partnership Forum, during which one of the key topics of discussion was related to COVID-19.

"Apart from that, there was a lot of business interest on what is happening with COVID-19. How is it moving? What could be its economic impact? All this matters to a lot of people who have invested in India, who have employees in India," he said.

The External Affairs Minister had also attended a series of meetings at the United Nations.

"If I were to sort of describe the objectives, one, of course, was to come here and express our appreciation for the very strong solidarity that the United States has shown during the second wave of COVID-19 in India, and to work with the US on the vaccine production issue, because the US in terms of the supply chain, for vaccines, is absolutely indispensable," he said.

"You would have seen even in my tweets, in many meetings, that an issue in some form or the other came up, and our endeavour is to expand our production of vaccines in India we will work with the US to make that possible," he told the group of Indian reporters.

On India getting vaccines from the US, Mr Jaishankar said there are ongoing conversations on various aspects of vaccines, ranging from regulatory aspects to legal and commercial ones. A large number of companies have reached out to ensure that their supply chain is smooth, he said.

This was something I had discussed in detail with Secretary Blinken, when we were in London. We have seen in the last two to three weeks the supply chain is working more smoothly. I think some of that is also due to the interventions by the (India's) ambassador (to the US), he said.

In terms of the details of which is the American stock from which President Biden has said that they would be willing to do some supplies, the issue came up at the conceptual level. But my understanding is that, in the coming days or weeks, the US will obviously make its decisions, the minister noted.

He asserted that India and the US are having sustained engagement over the issue.

The minister added that India has indicated a willingness to accept and import vaccines which have been cleared by the US Food and Drug Administration.