Radha Mohan Singh, a multiple-term local MP who was the agriculture minister in the previous Narendra Modi cabinet, says the endeavour is in line with the BJP's commitment to social service. 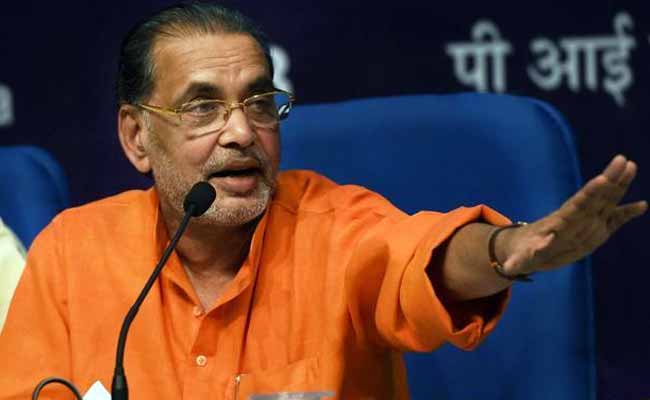 Amid the raging second COVID-19 wave which has left patients literally short of breath, residents of East Champaran district in Bihar have access to an "oxygen bank" committed to prompt delivery of
cylinders whenever required.

Radha Mohan Singh, a multiple-term local MP who was the agriculture minister in the previous Narendra Modi cabinet, says the endeavour is in line with the BJP's commitment to social service.

"State minister Pramod Kumar, who is also the local MLA, and district unit chief Prakash Asthana have been assigned a supervisory role while IT cell convenor Pankaj Sinha has been made in charge of the oxygen bank," Mr Singh, who is also a national vice-president of the BJP, told PTI.

"The team is equipped with 100 oxygen cylinders and arrangements are in place for refilling these. Party workers across the district have been apprised of this drive which aims at ensuring that no COVID death takes place in East Champaran because of non-availability of oxygen," said Mr Singh, who has assumed the role of the "patron" of the drive.

He said, "Till now, we have reached out to hundreds of COVID patients across those blocks of the district which fall under my constituency. As many as 262 critical patients have been saved because of timely supply of oxygen cylinders from our side."

A helpline number is in place and widely publicised and volunteers swing into action no sooner than a distress call is received, Mr Singh said.

"Our team has been instructed to pay special attention to those who are aged and living here alone, away from their children settled in other parts of the country or abroad.

Priority is also being accorded to those who cannot afford an oxygen cylinder themselves," he said.

"It seems that the word has reached far and wide and I myself have been flooded with calls from people living in places like Mumbai and Delhi with request for help for their parents or relatives back home," Mr Singh added.

The BJP leader also said that other efforts by the party include running of ''Modi Aaahar Kendra'' eateries offering free food and supply of PPE kits among ambulance drivers.

"We have also helped establish a telemedicine network. A team of doctors have been roped in for offering medical advice to those in home isolation," he added.