NV Ramana, who was speaking after he received the Justice V R Krishna Iyer Award from the Capital Foundation Society, said that the 1960s and 1970s were the most challenging periods in modern Indian history. 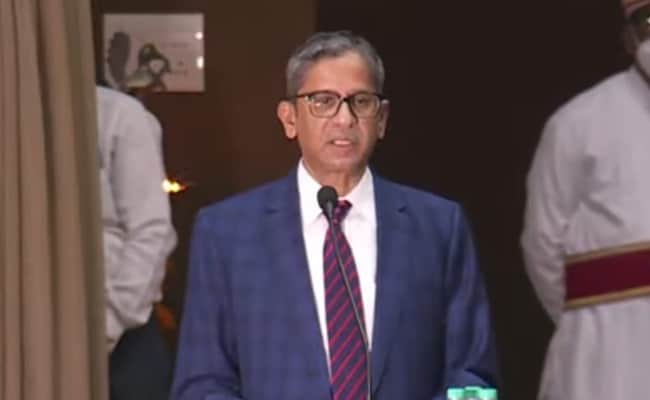 Courts should be dispassionate, and though people's verdict should lead to a course correction in a democracy, in certain situations the courts are expected to play the role of or supplant the Opposition, former chief justice of India NV Ramana said on Sunday.

NV Ramana, who was speaking after he received the Justice VR Krishna Iyer Award from the Capital Foundation Society, said that the 1960s and 1970s were the most challenging periods in modern Indian history.

The "era saw the tussle between the Parliament, which tried to maintain its primacy, and the Supreme Court trying to uphold constitutional supremacy", he said.

The former CJI stated the courts have played an important role in ensuring that constitutional rights are not a dead letter.

They have reinforced the idea that justice demands balancing individual needs with the welfare of the community, which resulted in the country thriving as the largest democracy governed by a written Constitution, he said.

Hailing from an agriculturist family in Ponnavaram village of Andhra Pradesh's Krishna district, Ramana retired from the office of the 48th CJI on August 26.

From putting the sedition law on hold to reviewing the money laundering verdict, and ordering probes into Pegasus snooping and Lakhimpur Kheri cases to ensuring appointments of record 11 judges in the top court and over 220 in high courts, he took significant judicial and administrative decisions in his 16-month tenure.

"Courts should be dispassionate institutions. In the march of democracy, ideally, the people's verdict is the only way of course correction. But in certain situations, it is expected that courts will play the role of or supplant the Opposition," Mr Ramana said while delivering the annual lecture at the event.

Acknowledging that over the decades, "a variety of opinions have emanated from the Supreme Court", the ex-CJI emphasised that an institution speaking in one voice is not a sign of a healthy democracy and diverse views were essential for the judicial institution as well as democracy.

He nonetheless shared that the duties of the CJI are "not limited to the Supreme Court but extend to the entire judicial system across the nation" and during his tenure, he focused on the issues of judicial infrastructure, filling up judicial vacancies and increasing efficiency by adopting technology.

"As an institution, the judiciary cannot be judged on the basis of any one opinion. Similarly, the country cannot expect a constitutional body, consisting of over 30 independent constitutional authorities to always speak in one voice," he said.

Speaking on the growth and evolution of Indian jurisprudence, Justice Ramana said that 1960s and 1970s were the most challenging periods in modern Indian history and the "era saw the tussle between the Parliament, which tried to maintain its primacy, and the Supreme Court trying to uphold constitutional supremacy".

Through the decades, he added, the Indian judiciary has expanded the scope of fundamental rights and is the repository of the trust and faith of people.

"Slowly, and progressively, through the course of its functioning, the court has built upon its own jurisprudence to ensure that the Rule of Law is always maintained.

"In the post-emergency era, several decisions have been revisited and new standards have been established. The perceived errors have been corrected. In the future as well, in tune with sensibilities of the time, the judiciary is bound to revisit and further strengthen the fundamental liberties and dignities which make our life worthwhile," ex-CJI said.

Justice Ramana said that the judiciary needs to examine several questions, including the misuse of the PIL system, while asserting that "it is the people's faith and trust that needs to be maintained" even by the judiciary and "any institution that does not enjoy public confidence is of no relevance to the society".

He stressed on addressing the "existing inadequacies" to be able to face the needs of the future, saying that while achievements of the 21st century need to be appreciated, it must be recognised that "the issues that were affecting us 70 years ago are still a reality".

Justice Ramana said that the judiciary needed to be equipped to face the emerging challenges, including increased litigation, and asserted that "sustainable and responsive growth is the key towards an inclusive and equitable future" and "dignified living for all is non-negotiable".

"Till we achieve the same, our constitutional aspirations will be empty dreams. As responsible citizens, we must push ourselves to be part of the solution, not the problem," he said.

"As a nation, we cannot stay in denial of the fact that hunger, poverty, illiteracy, and social inequity are still a reality for millions of Indians.

"Today's India reflects dual realities- on one side there are high-rise buildings, while on the other side people still reside in slums where children sleep in hunger. When we are aiming for space, the moon and mars, we should not forget the little stars struggling on the streets, slums, hamlets and villages," the ex-CJI said.