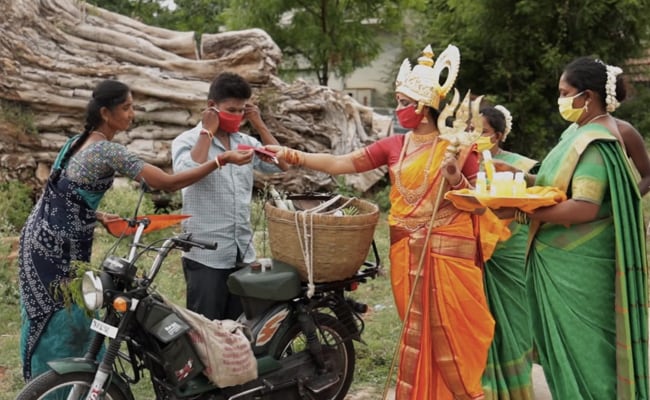 A woman in Tamil Nadu, dressed as Goddess Mariamman, was seen on the streets distributing masks and spreading awareness about the deadly COVID-19. Tamil Nadu is at number two on the list of worst virus-hit states in India.

People in Tamil Nadu, particularly in rural areas, pray to Goddess Mariamman for good health and immunity. A short film has also been made titled 'Kakkum Amman' or 'The Guardian Goddess', to reach out to the locals, say health workers. Around 30 per cent of the people in rural coronavirus hotspots don't follow guidelines, say state health officials.

Since the pandemic spread like wildfire and countrywide lockdown was announced in March, policemen and social workers, dressed as gods were often seen asking people to stay home and take precautionary measures against COVID-19. From Delhi to Bihar and Andhra Pradesh, 'Yamraj', was a common sight asking people to stay indoors.

Delhi Police, with the help of a local artist dressed as Yamraj, created awareness among the people and appealed to them to remain indoor during lockdown. Announcement was made by them for the people in RK Puram area, in a bid to create awareness. #COVID19pic.twitter.com/7aJ3UC3ut7

In Tamil Nadu, 3,756 positive cases and 64 deaths were reported in last 24 hours. So far there are 1,22,350 cases in the state. Chennai, Madurai, Chengalpattu, Thiruvallur and Tuticorin are reporting most cases. The recovery rate in the state is over 60 per cent.

Businesses and shopping centres have reopened in Tamil Nadu on July 6. Lockdown however continues in Madurai, where a steady rise in new cases is being seen. While malls can function with 50 per cent staff and without air conditioning, large showrooms can have only five customers at a time.

Bus services remain suspended across the state till July 15 and people will need e-passes for inter-district travel. Small places of worship in villages of Kancheepuram, Chengalpattu and Thiruvallur have also reopened with restrictions.