Madhya Pradesh Asks 7 States To Provide Prior Information On Migrants

As most of the migrants heading north pass through Madhya Pradesh, the government can make adequate arrangements for them if it knows in advance their arrival schedule, Chief Minister Shivraj Singh Chouhan said. 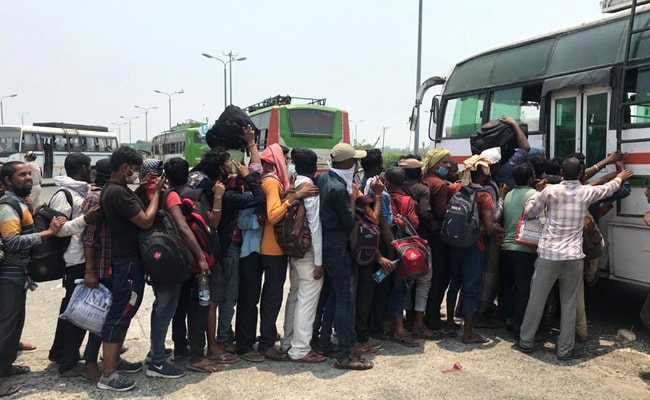 Madhya Pradesh asked states to relay information about the number of migrants on the move. (File)

Madhya Pradesh Chief Minister Shivraj Singh Chouhan asked his counterparts in seven states to inform his government in advance about the movement of migrant labourers amid the nation-wide lockdown.

As most of the migrants heading north pass through Madhya Pradesh, the government can make adequate arrangements for them if it knows in advance their arrival schedule, he said.

Mr Chouhan apprised the chief ministers of Maharashtra, Gujarat, Rajasthan, Karnataka, Telangana, Jharkhand and Chhattisgarh of practical problems faced by his state due to sudden influx of migrants, a government spokesperson said.

The state government is arranging free food, medicines and transport for migrants, but the lack of prior information is causing chaos as well as law and order issues, Mr Chouhan wrote in the letters to the chief ministers.

He requested them to relay information about the number of migrants on the move from their states, vehicles ferrying them and their schedule of arrival at MP borders.

The state's location at the centre of the country means it falls in the route of migrants moving towards states of Uttar Pradesh, Bihar, Rajasthan and Jharkhand, Mr Chouhan pointed out in his letters.

The government had arranged 1,000 buses to ferry migrants from other states, he said.

Mr Chouhan also informed that about 3.84 lakh migrant workers from Madhya Pradesh had been brought back from other states so far, and 11,300 buses have been deployed to take them to their destinations, the official added.