"Risen To Call Of Humanity": PM's Shoutout To Air India Amid COVID-19 Ops

Coronavirus: In India, the number of cases touched the 400-mark today after seven deaths were reported and country a sharp spike in cases in last few days. 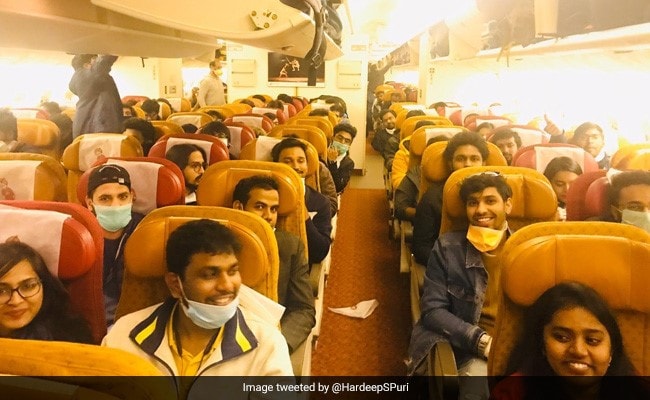 In a shoutout to an Air India team, involved in evacuation of about 260 Indians from coronavirus-hit Italy over the weekend, Prime Minister Narendra Modi this morning tweeted that their "outstanding efforts are admired by several people across India". The tweet comes a day after the state-run airlines had put out a statement where it talked about ostracisation its crew is facing by "vigilante resident welfare associations" over COVID-19 rescue ops.

Praising the Air India crew for demonstrating "utmost courage", PM Modi wrote: "Extremely proud of this team of @airindiain, which has shown utmost courage and risen to the call of humanity. Their outstanding efforts are admired by several people across India. #IndiaFightsCorona (sic)," the tweet read.

PM Modi shared a tweet from Union Minister Hardeep Singh Puri in the post who said, "When the going gets tough, the tough get going". Mr Puri a photograph of the crew of Air India Boeing 777 led by Captain Swati Raval and Captain Raja Chauhan who airlifted 263 Indians, mostly students, stranded in Italy's Rome.

Extremely proud of this team of @airindiain, which has shown utmost courage and risen to the call of humanity. Their outstanding efforts are admired by several people across India. #IndiaFightsCoronahttps://t.co/I7Czxep7bj

India has carried out evacuations from several countries in the past few weeks. It has brought back its citizens from Italy, China, Japan and Iran as the number of cases of coronavirus continues to rise in these countries.

Earlier this month, a special Air India aircraft brought back over 200 Indians stuck in Italy where number of deaths has surpassed death count in China, the country where COVID-19 originated. Another batch of 234 Indians was brought back from Iran.

However, amid these rescue operations, Air India staff has been facing discrimination, the state-run airlines said in a statement on Sunday.

"...It is alarming to note that in many localities, vigilante Resident Welfare Associations and neighbours have started ostracizing the crew, obstructing them from performing their duty or even calling in the police, simply because the crew travelled abroad in the course of their duty," Air India said in a statement.

"These vigilantes have conveniently forgotten that many a spouse, parent, sibling, child and near and dear one have been brought home safe and secure from affected countries, thanks to the heroic efforts of these Air India crew," the airline said.

"We would like to appeal to all concerned, particularly the law enforcement agencies, to ensure that our crew are treated with the courtesy, respect and freedom that every citizen of this country deserves especially in light of the fact of their having undertaken flight duties to affected countries to bring back Indian citizens," Air India said.

The crew members - part of these rescue ops - are sent on home quarantine and also to designated hospitals for check-up as part of the protocol, it added.

Coronavirus pandemic has spread to over 140 countries across the globe since its origin in China's Wuhan city in December. Worldwide, over 3 lakh people have got infected, more than 13,000 have died.

In India, the number of cases touched the 400-mark today after seven deaths were reported and country a sharp spike in cases in last few days.