Read inOther Languages
This Article is From Mar 29, 2020

14-Day Mandatory Quarantine For Lakhs Of Migrants Returning To UP, Bihar

India Lockdown: Thousands desperate to return home had crowded bus stations in Delhi on Saturday after over 500 buses were arranged for them by state governments in Uttar Pradesh and Delhi.

Coronavirus Lockdown: Thousands of migrants labourers have returned to Bihar amid COVID-19 scare.

A 14-day quarantine in state-run camps is mandatory for lakhs of migrant labourers who are returning to their hometowns in Uttar Pradesh and Bihar in special buses amid a nationwide lockdown over coronavirus or COVID-19.

Thousands desperate to return home had crowded bus stations in Delhi on Saturday after over 500 buses were arranged for them by state governments in Uttar Pradesh and Delhi. Heartbreaking visuals over the last few days had shown migrants trying to reach their native towns and villages on the foot. Transport services - including interstate buses and passenger trains - are shut for the next three weeks after Prime Minister Narendra Modi's Tuesday announcement of "total lockdown" to curb spread of COVID-19.

In Uttar Pradesh, Chief Minister Yogi Adityanath has directed all the district magistrates to trace over 1.5 lakh migrants who have returned to the state in the last three days, quarantine them in state-run camps and ensure arrangements for their food and other everyday needs. Their names, addresses and phone numbers have been made available to these officials and they are being monitored.

"All of these migrant labourers have to stay in government camps for 14 days. They would not be allowed to return to their homes," Deputy Chief Minister Keshav Prasad Maurya said. More than 65,000 calls were made to village heads last night to ensure the arrangements. 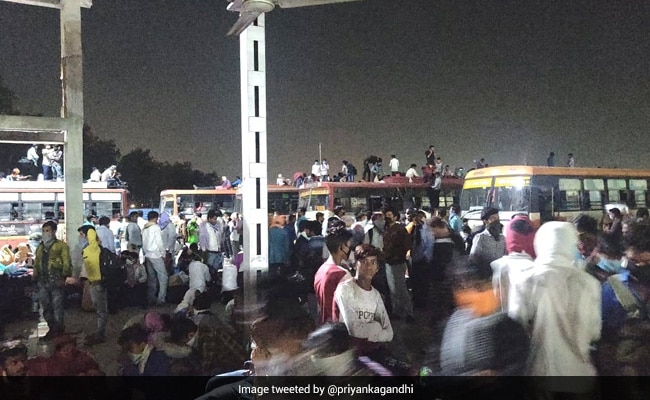 Nodal officers have been appointed to carry this exercise. The village bodies have also been asked to prepare a list of migrants.

Last night, however, as some batches reached eastern UP's Deoria district, many of them were allowed to go to their villages after a thermal scanning. Visuals from the bus station showed the workers queuing up, being scanned by a team of doctors and health workers. Questions about their names, addresses, phone numbers were also asked. Only those suspected to have contracted the infection are being quarantined, said an official. No suspect was found during the late-night screening.

In Bihar, Chief Minister Nitish Kumar has also ordered officials to set up relief camps in the bordering districts to receive thousands of migrant workers who are coming from northern states amid the COVID-19 pandemic. The migrants will be allowed to go home after the 14-day mandatory quarantine period.

Last week, when special trains carrying migrants arrived in the state, there was apprehensions among locals over their return amid COVID-19 scare. Special camps were set up by village bodies to accommodate them.

On Saturday, Nitish Kumar had said that running special buses would defy the purpose of lockdown. "This entire exercise to send back people to their (native) states by special buses will defeat the purpose of lockdown. It will lead to an increase in the spread of virus in the next few days," he told NDTV. "It is better to organise camps locally, instead of trying to send people back home. The state government will reimburse the costs of these camps organised by anyone," he added.

Across India, over 900 have contracted COVID-19 infection so far, at least 19 have died. The highly contagious disease has infected over half a million across the world, killed more than 20,000.

Technically called the severe acute respiratory syndrome coronavirus-2 or SARS-CoV-2, the novel coronavirus causes the COVID-19 disease, which originated in China's Wuhan city. It spreads fast in crowded places and social distancing is an effective way to control the pandemic, according to experts.