Goa, India's smallest state, is reeling under one of the most severe lockdowns in the country, where Chief Minster Pramod Sawant has imposed restrictions on movement, linking the supply of essential needs to helplines and home delivery.

Not just groceries, the lockdown seems to have hit other essential supplies as well. (File)

In Panjim, Goa's capital, 73-year-old Fatima Alvares says that despite her age, she has always been an independent woman. "But now with the curfew and with my age, I can't do anything... I am completely handicapped now," she says.

She hasn't been able to get essential groceries like eggs, bread delivered since the start of nationwide lockdown to fight coronavirus or COVID-19 last week, she complains.

Fatima Alvares is not alone.

Goa, India's smallest state, is reeling under one of the most severe lockdowns in the country, where Chief Minster Pramod Sawant has imposed restrictions on movement, linking the supply of essential needs to helplines and home delivery.

On Sunday, the Chief Minister's Office tweeted that the state government had "started running food buses/vehicles with cooked food for the needy," along with a poster with two food helpline numbers, one each for Goa's north and south districts.

Goa Govt has started running food buses/vehicles with cooked food for the needy.#GoaFightsCOVID19pic.twitter.com/Q07HUQKA4l

However, when NDTV tried these numbers, it was found that the number shared by the handle for the north district did not exist.

Calls to the helpline number for the south district were answered, and they said that they would deliver cooked food and essential ration to the needy.

The Goa government website also has a list of about a 150 establishments, shops and volunteers who have been authorised for home delivery in the south district. 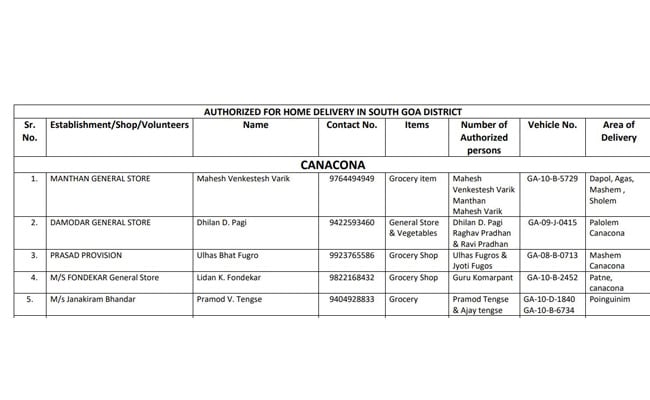 NDTV contacted five of the grocery shops listed here, of which at least two said they were running low on stocks, and hence were not delivering goods anymore.

The fair price shop in Quepem area, another store authorised to deliver essentials in the South Goa district, said that while they had stock, they were not home delivering goods.

The other two stores - Horticultural Shop in Ponda area and Suhas General Store in Sanguem area - could not be reached, as they either did not answer the phone or the listed number was switched off.

Many stores in the state have either shut down completely or are seen working with half their shutters drawn and their shelves barely stacked.

Not just groceries, the lockdown seems to have hit other essential supplies as well.

"I am a diabetic patient, and also a heart patient. The most important thing is that we don't have proper masks. I am roaming with a Rs 25 mask, and we actually need proper 3 mm masks," said Arturo D'Souza from Santa Cruz.

Locals blame the chaos at what they see as a botched rollout of the lockdown by the Chief Minister.

He initially sealed borders and closed shops, before being forced to partially roll back the closure under pressure.

Controversially, he brought in central paramilitary forces to keep people off the streets.

In a press conference on Tuesday, Mr Sawant said that he had held meetings with wholesalers to streamline grocery timings.