They don't know how serious and dangerous the COVID-19 pandemic - which has claimed over 5,000 lives and infected at least a lakh of people - is, Hema Malini said 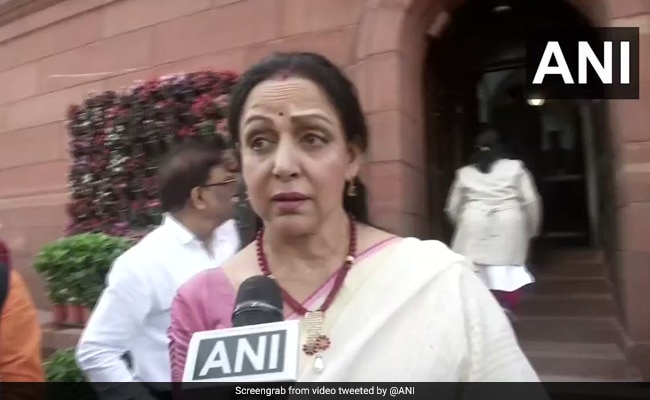 BJP leader Hema Malini hit out at people making insensitive jokes about the novel coronavirus outbreak in the country, warning them such jokes were in bad taste as people were dying around the world.

"They don't know how serious and dangerous this (the COVID-19 pandemic that has claimed more than 5,000 lives and infected at least a lakh of people) is," the actor-turned-politician told news agency ANI today.

"I have seen people joking about it on WhatsApp, saying things like "corona, marona". This is wrong. Coronavirus should not be taken lightly," Hema Malini said.

The BJP parliamentarian, who retained her Mathura Lok Sabha seat in last year's election, also cautioned people to be conscious of basic hygiene and said Indians needed to be "extra-careful" because of crowded cities.

"We must be extra-careful because we live in large families and in crowded neighbourhoods and cities, where the chances of infection spreading are very high," she said.

#WATCH BJP MP Hema Malini on #CoronaVirus: Everybody should be careful & secure themselves and not travel overseas. It is good that visas have been cancelled. I have seen people joking about it on WhatsApp, like 'corona, marona', it should not be taken lightly. pic.twitter.com/cbVtqVrBPW

More than 80 cases of COVID-19 infection have been confirmed by the Union Health Ministry so far, including 17 foreigners in isolation in Haryana, Rajasthan and Uttar Pradesh. More than 11 lakh people have been screened at airports across the country.

Kerala, Maharashtra and Uttar Pradesh are among the worst-affected states, with 19, 14 and 10 confirmed cases reported so far, according to the Union Health Ministry.

As part of its response, earlier this week the government shut international borders to existing visas - except diplomatic, official, UN/international organisations, employment and project - till April 15.

Hema Malini referred to the ban as well and said it was a good thing some were cancelled.

"Everyone should be careful and secure themselves. Try not to travel overseas. It is a good thing that visas have been cancelled. Family members who wish to come and visit during holidays in May must also be warned," the actor-politician said.

India reported its first COVID-19-related death late Thursday night. The victim was a 76-year-old man who had returned on February 29 after a month-long trip to Saudi Arabia. He had been screened at Hyderabad airport but was asymptomatic on arrival.